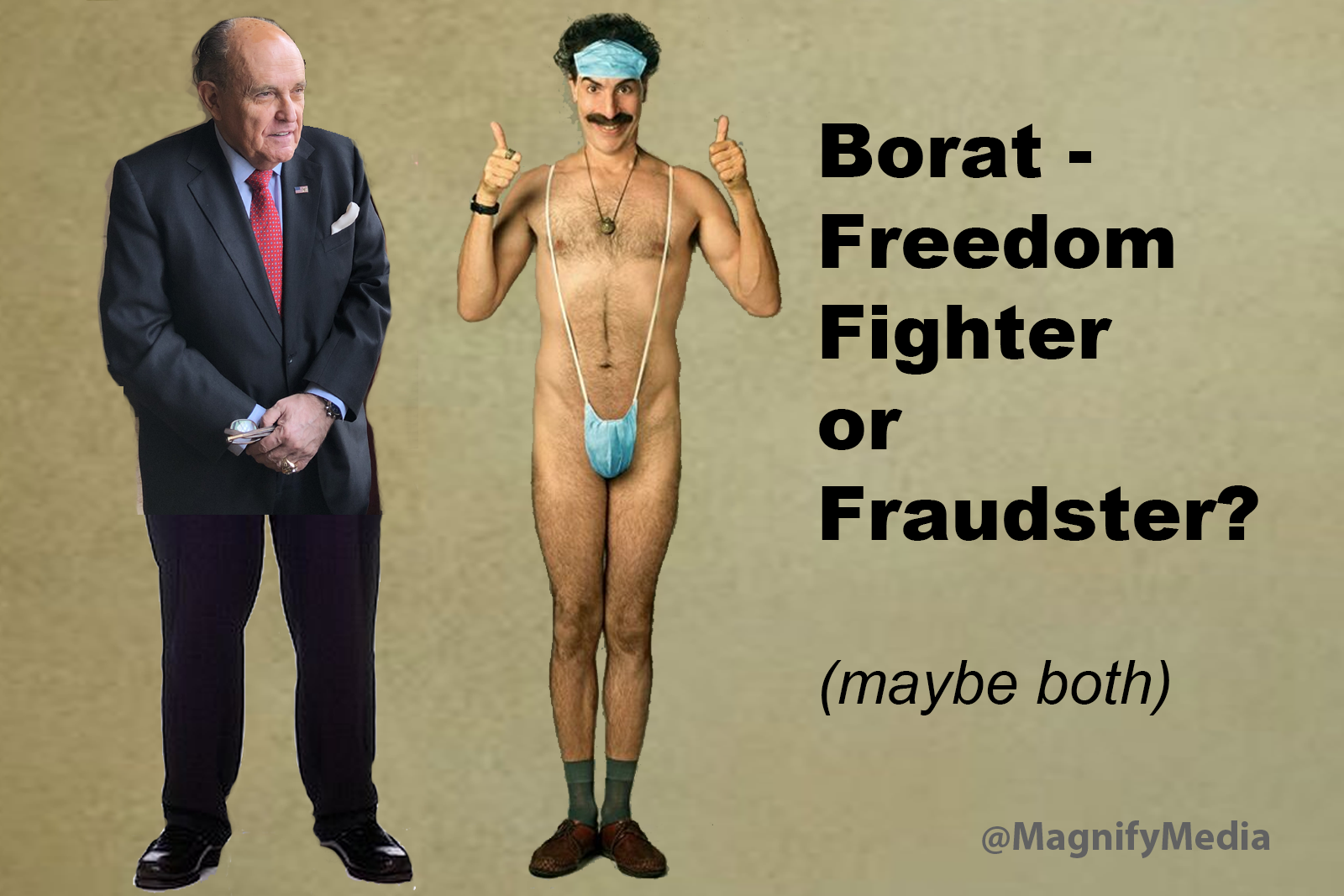 Lots of people have issues with the new "Borat Subsequent Moviefilm." And that’s no accident. It’s exactly what Sacha Baron Cohen wanted to happen.

In the film, every character is an unwitting victim of Cohen’s participatory conspiracy.But if you dig below the surface and explore the filmmaker's objectives, he has achieved them brilliantly. I’ll explain, but let’s start by unpacking the list of alleged crimes against film-making that Cohen committed.

It isn’t a documentary.  Agreed, it’s not, and he doesn’t claim it is, and neither does his distributor, Amazon Prime.

It isn’t funny.  Again, hard to define what a comedy is when you’re exploring subjects like anti-Semitism, racism, neo-Nazis and misogyny. Hardly funny topics.

That being said, depending on your politics, there are certainly moments that might make you  laugh out loud. "Cringeworthy" is one word that's often said about the film, and that’s certainly true. But if you came looking for laughs, and not a social commentary, you came to the wrong film.

Characters in the film were coerced or entrapped. OK, sure. But one might argue that anyone who agrees to be filmed or interviewed comes to the lens with a point of view they're looking to propagate. Keep in mind, Cohen doesn’t pretend to be doing journalism. Comedy is his cover story -- beyond that, you have to decide for yourself.

Sacha Baron Cohen is unlike any other filmmaker. And what he does is complicated. It's certainly not a documentary, it's also not a drama or a piece of fiction.

The form is complicated, and his employees are a mix of paid actors, paid amateurs, and nonprofessionals who are coaxed (or duped) into playing a role without knowing the context of the story they'll be in. IndieWire did some reporting and reached out to some of the real people, including the baker, the plastic surgeon, the UPS store guy and the family of the older Jewish woman.

In each case, they were told a story about what was being filmed that was not entirely true. But this goes more into the prank category than coercion.

Some were paid as “actors,” others were asked to help tell their side, like the anti-abortion center.

Each character or location was coaxed into participation, with just enough information to rope them in.

Which brings us to the Rudy Giuliani hotel interview/bedroom seduction.

Why did Rudy arrive at a hotel room to be interviewed by a “reporter” with no credentials and a “news organization’” that wouldn’t have passed even a cursory background check?

It may be that the location, the Mark Hotel, played an unwitting part in the Giuliani scheme.

The Mark Hotel, I'm sure, was told little about what was being shot in their hotel other than “interviews,” and that the film crew had the necessary certificates of insurance. But the Mark's location probably helped create an aura of legitimacy.

Borat is the perfect example of the "post-truth" world we now live in.

The question is, though, if a filmmaker sets out to make the film that Cohen wanted to make, what are appropriate tools or limits -- or does outcome justify new production norms?

The film is popular, impactful, and provocative. This was the agenda, and it was achieved.

There's no right or wrong way to make films that break through and are socially relevant.

Oliver Stone famously made "JFK," a film -- not a documentary -- about the Kennedy assassination that appears to be factual, but lives in the world of historic-based fiction.

Cohen, going back to Ali G days, has developed a unique set of tools to infiltrate and expose what he believes are important “truths.”

Cohen said at the Summit on Anti-Semitism and Hate in 2019" “Freedom of speech is not freedom of reach. Sadly, there will always be racists, misogynists, anti-Semites, and child abusers. But I think we could all agree that we should not be giving bigots and pedophiles a free platform to amplify their views and target their victims."

You may not agree with the issues he chooses, or the tools he uses to engage with them, but I don't think his motivation is to cause pain or sell tickets.

Will his film bring people to the polls to vote? Probably not. Will it keep people home? I'd say also probably not. So does his film, and its timing have an impact? The election may be part of that story.

film, movies, politics
1 comment about "Borat: Freedom Fighter Or Fraudster? Maybe Both".
Check to receive email when comments are posted.
Next story loading