This Just In From The Mars News Channel... 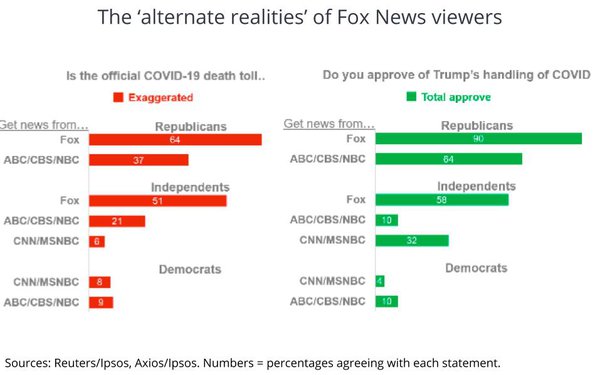 A variety of polling, sophisticated market research techniques, modeling and expert political forecasting in the final weeks of the 2020 campaign season points to Joe Biden winning the presidential election, at least by a narrow margin, and possibly more. Some of the research also suggests the biggest loser of the election won’t be the incumbent President, but the American public. But not for the reasons you think.

A revealing insight from Ipsos’ tracking suggests a significant percentage of Americans won’t accept the outcome of the election -- no matter what the outcome -- and that it’s not because of simple political “partisanship,” but because they actually come from another planet that has an alternate view of reality.

That planet is called Fox News Channel, but according to Ipsos’ top political expert Chris Jackson, it might as well be called Mars.

“This is really important to understand,” Jackson said during the last in a series of Ipsos political briefings leading up to this year’s election, noting “we’re not even necessarily talking about the same reality. In a lot of ways, some of us are talking about Mars and others are talking about Venus.”

Citing studies Ipsos conducted with Reuters and Axios, Jackson noted that regardless of their political affiliation, Americans who get their news from Fox have a different sense of reality.

The studies, which asked voters of all parties whether they agreed or disagreed with two facts -- the official U.S. COVID-19 death toll and whether they approve of the President’s handling of it -- found alternate views of those realities even within the same party, depending on whether they depended on Fox as their source for news.

“We see a huge difference between Fox News Republicans and non-Fox News Republicans,” Jackson said while presenting the data shown in the chart above. He also noted the same thing was true among Independent voters, depending on whether they got their news from Fox or not.

“There’s a strong divergence about what we understand to be ground truths and ground facts,” Jackson bemoaned, adding that this disparity could create problems next week based on “how various media outlets” report on the election’s results, especially if it is a close election.

“How partisans interpret that reporting is really going to impact how we all handle that post-election period,” Jackson forewarned.

While Jackson didn’t explicitly editorialize on the culpability of any media outlets, this is an opinion-based political blog, so I think it’s fair for me to say his findings illustrate just how dangerous Fox News Channel has been to American democracy. Istead of unifying us around common ground, it has focused on spreading alternate views of truth that have contributed to what Jackson described as the “most chaotic” political season ever. And based on his caution, it likely will be the most chaotic post-election period, too.

I understand that, at some level, offering a different political point of view is healthy for democracy, but offering different facts is not. That’s normally the role of hostile foreign agents -- especially Russians -- who use disinformation as part of their hybrid warfare to destabilize Western democracies. It shouldn’t be the role of a homegrown American media enterprise.

Worst of all, it has proven to be a successful business strategy, driving Fox News’ ratings and revenues. According to a Pew Research Center analysis, Fox News’ ad revenues actually surged 41% during the pandemic. And I’m guessing that wasn’t all from the My Pillow Guy. I’m guessing a lot of it came from mainstream consumer brand marketers who actually care about the negative impact Fox News’ disinformation -- er, I mean “alternate facts” --  are having on American democracy.

So I just have to ask -- at a time when you all seem so consumed by “brand safety” -- you’re not applying the same standards to America’s safety?