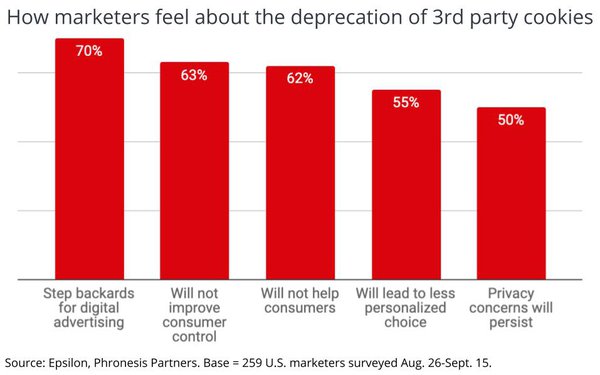 As well intentioned as the deprecation of third party cookies may be, the effect ultimately may be meaningless, as advertisers, agencies and a wide range of data and technology suppliers come up with workaround that effectively achieve the same results, albeit potentially with even less desirable experiences -- for consumers and advertisers alike.

A recent survey of U.S. marketers by Epsilon found not so surprisingly that they're not all that keen on the deprecation, but somewhat surprisingly, some of their reasoning has more to do with the experience of consumers, not marketers.

But hey, what do you expect marketers to say?

On a more pragmatic note, the horse race has already begun across the ad tech industry to fill the gap with a variety of stopgap solutions, many of which are leaning into the IAB Tech Lab's "Unified ID 2.0" solution. Just this morning, The Trade Desk announced a deal with Nielsen to deploy the new ID as a workaround to replace cookies.

And the best part of such solutions is that they may actually work better than cookies, anyway. Cookies were always prone to their own degradation, including both inflation and deflation, depending on who -- and how many -- were using a device's browser, and how frequently they dumped their cookies and cleared their cache.

The IDs have several advantages, especially their ability to operate across media, not just conventional web browser based ones.

"Advertisers will now be able to understand campaign performance across streaming TV, browsers, mobile, audio, TV apps and devices with a single ID, creating a stronger environment for precision and measurement," The Trade Desk asserts in its ID announcement with Nielsen this morning, emphasizing, "This is critical as marketers and publishers look to understand their audience across platforms in a simple way."

So as painful as the deprecation of third party cookies may seem, in the long run it may actually improve some things -- for marketers, if not actually for consumers, anyway.