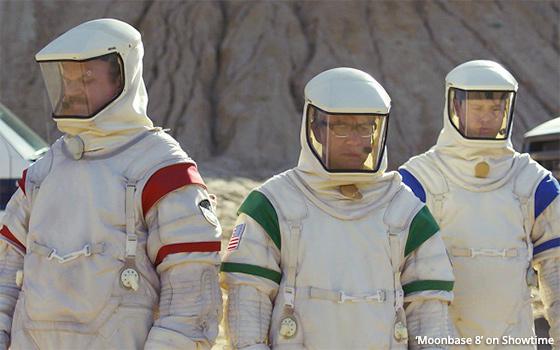 Three bumblers are supposedly training for a colonizing mission to the moon, but will these three stooges ever get off the ground?

That would appear to be the central question -- or “hook,” if you will -- of this new made-for-Showtime series called “Moonbase 8.” It premieres this coming Sunday night.

The Moonbase of the title is not actually on the moon. Instead, it is somewhere in an Arizona desert.

It is a training facility that has been designed to imitate the base that a fictional NASA seeks to build on the moon.

Thus, these three moon-colonizers-in-training -- played by John C. Reilly, Fred Armisen and Tim Heidecker (seen l-r in the photo above) -- have taken up residence in this earthbound desert moonbase where they are supposed to be hard at work simulating their eventual lives on the lunar surface.

But wait, there's less! Basically, this show is a workplace comedy that just happens to be set in a fictional NASA facility.

But for all intents and purposes, it is more or less the same as every other such modern-day workplace sitcom.

Among other challenges, the workers here at Moonbase 8 are waging a continuing battle with boredom and ennui. And unfortunately, so are we.

Not much happens at Moonbase 8, which might have struck this show's four co-creators as hilarious.

Unfortunately for the rest of us, ennui by its nature would not seem to possess much in the way of entertainment value.

“Moonbase 8” does have its comedic moments. In one of them, a terrible tragedy befalls one of the Moonbase crew members.

It is a very serious mishap, but in a great example of the richness of dark comedy when done correctly, this tragic event becomes the jumping-off point for a series of comedic scenes.

Another scene also achieves a high level of comedy when the three Moonbasers each realize that not one of them knows what the letters in “NASA” actually stand for.

But these comedic moments are few and far between. Mostly, the show consists of these three characters sitting around -- or occasionally standing -- and talking.

In their case, talking equals boredom.