Brown-Forman's Website Broadens Its View: Now It's Cocktails And Quiche 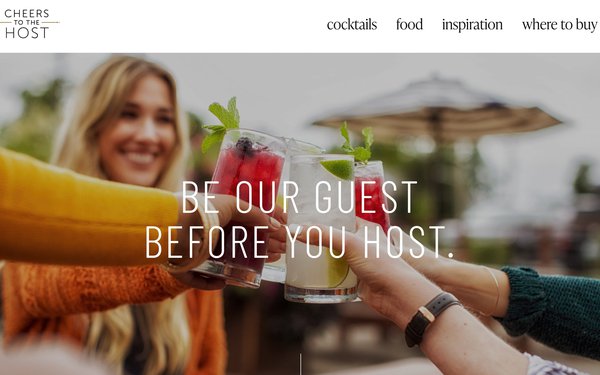 The Brown-Forman distillery is revamping its CheersToTheHost.com website for drinkers, now offering tips about entertaining at home as the pandemic has changed the way Americans live.

The new site includes party recipes and entertainment themes like hosting a tailgate party that aren’t the same-old same-old.

Presumably brands like Jack Daniel’s, Woodford Reserve, Finlandia and Ford’s Gin will have a starring role, but unlike the former site that was heavy on bartender-level mixology, the new CheersToTheHost is trying to be more of a lifestyle magazine.

“We’re addressing a bigger, deeper impulse -- the mentality of the host -- and treating ‘Cheers to the Host’ as a brand in itself,” said Erich Parker, vice president of the agency Blue Chip, which is in charge of the new look.

Parker said the new site has more of a psychographic goal than a purely demographic one. It wants 21- to 54-year-olds -- but ones who have, or are developing, “a hosting orientation.”

The impetus for the revamp, for sure, is  that during the pandemic ordering liquor online has quickly become the new normal, with alcohol delivery platforms like Drizly and Saucey -- plus grocery delivery sites like Instacart that include liquor stores -- seeing alcohol business explode. The Washington Post reported that Drizly’s  year-over-year sales have gone up 350%.

According to a Nielsen report in September, 39% of households report they eat 100% of their meals and snacks at home. That statistic, before the pandemic, was just 12%. The research company calls it the “homebody economy.” And the spirits sector is holding its own: The report said liquor’s off-premise uptick was 26.2%, larger than any other type of alcohol.

“Consumers’ new discovery zone is at home online,” said Loren Catrambone, group manager, of customer marketing, national accounts at Brown-Forman. In the past,  “We’ve counted on bartenders and servers to introduce people to new varieties and drink options, and on retail staff to inform brand decisions. Now we need to give people a more comprehensive, inviting source of ideas and resources.”

On the new site, there are  recipes for a variety of food treats, like Brie Stuffed French Toast, but also a recipe for a Jack Daniel’s drink that includes lemonade and cranberry juice and is named The Red Zone. “Add this easy game day cocktail to your playbook and grab a seat on the couch,” the recipe blurb suggests.

Other features include a how-to for hosting a whiskey tasting (albeit using all Brown Forman brands) and -- surprisingly --”Quick and Easy Mocktail Recipes.” that lets a party host give some love to the designated driver.