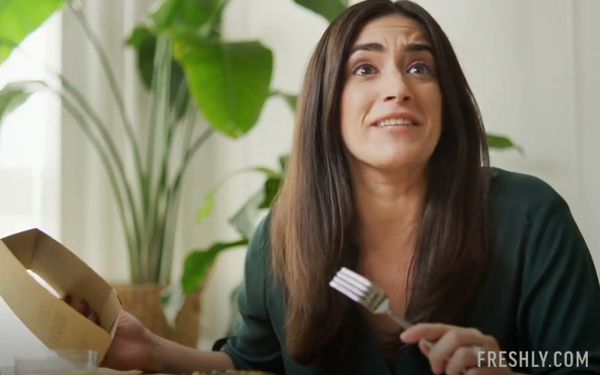 Even before the pandemic, plenty of people hated to cook. But while eight months of COVID-19 cravings probably haven't changed America's palate, it's sure shaken up the way people tackle this dreaded chore, driving up sales of takeout, prepared meals and meal kits. Nestle knows this, and just snapped up Freshly, the D2C prepared meal company, for $950 million.

Freshly CEO Michael Wystrach tells D2C FYI how consumers are changing, and what the merger with Nestle means.

D2C FYI: Of the many changes we've seen in the way people eat due to the pandemic, which do you think are permanent?

Michael Wystrach: The American consumer is more open to purchasing food online than they ever have been, at nearly three times the rate seen at the beginning of the year. As everything transitioned online, there was this massive acceleration.

Wystrach: Speed. What I expected to happen in three to five years has taken three to five months. I am a big believer that this rapid adoption of direct-to-consumer and ecommerce in food will ultimately lead to positive changes. There'll be less waste. Using data, people can be their own chef and nutritionist.

D2C FYI: Freshly sells prepared meals, which makes it a little different than meal kits. What kinds of meals are people craving?

Wystrach: In general, we've seen consumers continue to lean in on healthier choices, including alternative protein and more vegetable-based meals. The whole trend toward cleaner eating isn't new. But the push for more nutritious foods, and natural ingredients, has accelerated since COVID.

D2C FYI: Freshly is aimed at people who don't like to cook. Your TV ads feature people joyfully saying, "We don’t  have to cook anymore!" Do you know how many hate it?

Wystrach: We have a study from Harvard that found that about 21% of people love to cook, and more than 75% either don't care for it or despise it.

Wystrach: I love barbecuing. I love cooking and grilling. But I like doing it on my own time, on a Friday or Saturday when I can enjoy the experience. I like going out to eat, as well.

But if I'm coming home at 8:00 at night and I've worked a long day, I'm not a fan. And I think many people struggle to balance it all.

D2C FYI: Who is your typical customer now, and how might that change now that Nestle owns you?

Wystrach: The biggest change isn't due to the acquisition, but COVID-19. Before, it was a younger demographic: under 40. Now, older consumers -- even seniors -- are buying things online. And once they try it, they enjoy not having to go to the grocery store, not having to pick up food at a restaurant. Those things will continue to scale over the next three to five years.

D2C FYI: The pandemic also saw a surge in the opposite trend of convenience: slow foods like sourdough bread, right?

Wystrach: Cooking has tipped much more to entertainment for most Americans. But as the world gets back to normal, people will be more time-starved again.

It takes a long time to bake bread. People who enjoy cooking will always enjoy it, but when it's just about the function of food, you can get it from other places. That's where Freshly comes in.

D2C FYI: What is Freshly's approach to marketing?

Wystrach: We've been able to do less marketing because people are coming to us. And we switched to bigger channels, including TV and Facebook. Our market is much broader now because so many people are open and willing to buy food online and experiment with products.

D2C FYI: Are you considering expanding to meal kits? Partnering with retailers?

Wystrach: I would never say never. Near-term, we're excited that we can build our product line with Nestle, offering nearly three times the number of meals. Variety has been the No. 1 pain point -- customers who want more choices. And they want it faster. As with all ecommerce, people are impatient. They want it shipped as soon as possible. And we don't envision ourselves offering a meal kit. We've focused on this idea of convenience -- that’s core to our mission.

D2C FYI: Whom do you see as your main competition?

Wystrach: Most of our customers are leaving something like Uber Eats, DoorDash or Grubhub. They're spending tons of money on takeout, so they look to us for something more affordable. We tend to be about 40% to 50% cheaper than delivery food.

And they want healthier meals. People, myself included, don't make the best choices on those platforms.