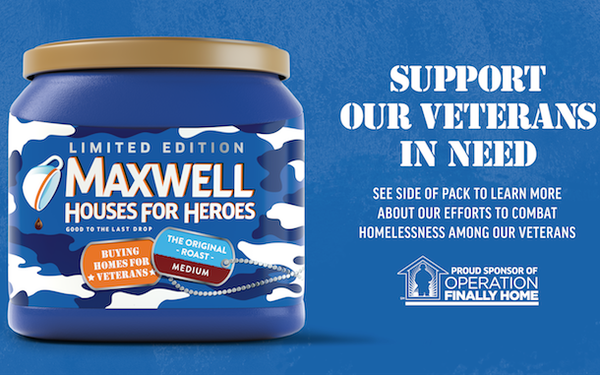 Maxwell House is helping to fund construction of mortgage-free homes for military veterans as part of a campaign to increase awareness of their risk for being homeless.

The Kraft Heinz brand is donating $200,000 in a two-year partnership with Operation Finally Home, a nonprofit organization that works in with builders, corporate sponsors and communities to support veterans in need.

Working with Operation Finally Home and the National Coalition for Homeless Veterans, Maxwell House “learned that 1.4 million veterans are at risk for homelessness,” senior associate brand manager Darin Snyder tells Marketing Daily. “For hundreds of thousands of those, it’s due to injuries or wounds that they sustained at war that makes it hard for them to own a home.”

Maxwell House is helping to spread the word with a three-minute video that chronicles the various hardships experienced by retired U.S. Marine Sgt. Bradley Thomas.

In the “Houses For Heroes” spot from VaynerMedia, Thomas relates that upon his retirement from active duty, “I thought my world was gone. I had a back surgery, I had no job, I had no place to call my own.”

Accompanied by family members, Thomas reads a letter from Maxwell House informing him that he has been gifted a mortgage-free home in Florida constructed by Lennar Corp.

“When we learned he was down in Fernandina Beach in the Jacksonville community, where our factory is, it was a way for us not only to support our veterans but as a way for us to give back to the community.”

In addition to appearing on social media platforms, the video will run during programming on History Channel’s 9 a.m. to noon Hero Block for the next three Saturdays.

Maxwell House is offering veterans and active servicemen and women coupons via coupons.com that can be redeemed at select grocery retailers for a limited-edition, Heroes Pack coffee canister through Nov. 16.

Other agencies involved with “Houses For Heroes” are Starcom and ICF Next.

In May of 2019, Maxwell House became the official coffee partner of the United Service Organizations and donated $650,000 in honor of Military Appreciation Month.