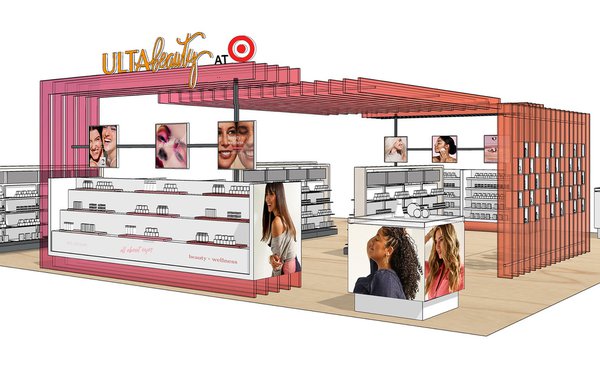 Target is dolling up its beauty departments, building a broad partnership with Ulta Beauty into its stores. The Minneapolis-based retailer, already operating store-within-a-store deals with Starbucks, CVS and Disney, says it intends to open Ulta units in 100 of its stores next year, adding "hundreds" in the years to come.

This is just the latest example of ways retailers are trying to sharpen their offerings. And while it's a tactic long used extensively by companies like Nordstrom and Macy's, it's taking on new urgency against the backdrop of pandemic-challenged store traffic.

"Ulta Beauty at Target reflects further evolution in our omnichannel strategy, rooted in unlocking the potential of our physical and digital footprints, creating more seamless shopping opportunities for our loyal guests and continuing to lead the beauty industry," says Mary Dillon, Ulta's CEO, in its announcement. "More than ever before, now is the time for innovation in retail."

Industry observers think the idea is promising. "Over the past couple of years, Target's beauty business has been growing at a rapid clip thanks to store refurbishments and the addition of many new and innovative brands," writes Neil Saunders, managing director of GlobalData, in his comment on the announcement. "However, Target is still not perceived by many consumers as a specialist player in beauty and, as such, it has missed out on growth within the more premium part of the market."

For Ulta, he sees other advantages. "Ulta has a weaker penetration among younger shoppers -- especially compared to Sephora -- and among those who purchase beauty only occasionally," he adds. "Target is able to deliver both of these audiences to Ulta."

Sephora, Ulta's rival, continues to be sold in many JC Penney stores, a trailblazing partnership begun back in 2006.

But there's likely no happy ending in store for that relationship. The battered JC Penney just received approval to sell itself to its two biggest landlords, bringing it out of bankruptcy. According to the Associated Press, the sale, likely to take place after Thanksgiving, is expected to result in the closure of almost a third of its stores in the next two years, leaving it with just 600 stores open.

Back in May, Penney and Sephora settled legal skirmishes, with JC Penney announcing it had "reaffirmed their long-standing partnership to operate Sephora inside JCPenney. Both companies worked constructively to resolve outstanding legal matters and have agreed to mutually beneficial revisions to their joint enterprise operating agreement."

Saunders isn't worried about Sephora, however. "Putting together two very focused and successful retailers is a threat to other beauty players," he says. Specialists like Sephora will be able to survive because of their brands' strength and the underlying loyalty of their shoppers.

Luxury giant LVMH, which owns Sephora, says that the retailer is holding its own, despite the impact of COVID-19. In quarterly results released last month, it says that while its retailing had a sales decline of 31% in the period, "Sephora demonstrated good resilience during the health crisis, which led to the closure of almost all its stores globally for nearly two months. Revenue improved in the third quarter. Sephora gained market share in its main countries, thanks to the strong growth of its online sales."