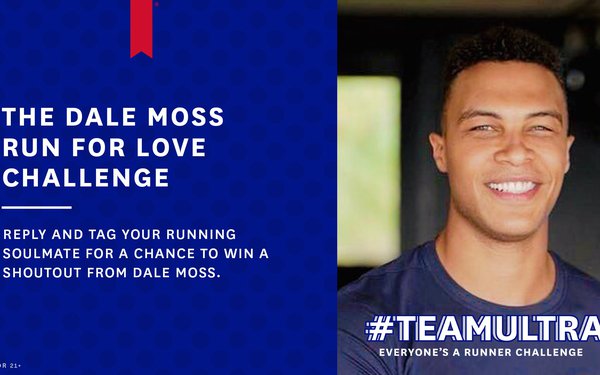 Michelob Ultra has been aggressively marketing itself to the fitness crowd, and is now starting the #TeamUltra “Everyone’s A Runner Challenge.” One winner gets to be in a Michelob Ultra commercial in 2021.

The contest is one in a series of ads and marketing ploys from Anheuser-Busch brands that use social media to create attention and engagement, particularly as the cancellation of many sports events earlier left brands without a familiar place on TV to advertise.

The contest itself doesn’t involve pouring out much sweat.  In one challenge,  contestants are required to tag their “running soulmate” on social media, which could result in winning a response from former football star and current reality hunk contestant Dale Moss. Another contest lets you “participate” in a 5K with cross-country star Molly Huddle by uploading a screenshot that includes the distance you’ve run to possibly win an Ultra running kit.

Another challenge involves asking contestants to tag friends who need an extra push to exercise. A winner in this competition could get a special motivational boost from celebrity trainer Ron Everline.

Besides these influencer-type awards, participants can also win a “suite of epic prizes,” so far unspecified. One random winner will get the chance to be featured in Michelob Ultra’s next “running-focused” TV commercial some time in 2021.

Michelob Ultra says it’s trying to bring “joy to the running season” -- though running, already a mostly solitary pursuit, has become even more so  during the COVID-19 crisis.

The brand has carved a good chunk of the premium market by angling toward health club members and runners. It’s now the nation’s second-best-selling beer by dollar sales (number one is Bud Light).

It’s not super-low in alcoholic content (4.2%) but it has only 95 calories per bottle and just 2.6 carbs. Those are low enough to woo some drinkers who also follow healthier pursuits.

Early on in the pandemic, Michelob Ultra initiated “Movement by Michelob Ultra,” in which it sponsored virtual workout sessions that included a virtual tip jar to show the beer’s solidarity with out-of-work trainers.

Way back in 2016, it sponsored a series of videos with Runner’s World magazine showing tips to runners--instruction on the bottom of the screen, Michelob Ultra ad at the top.

In Canada,  Spotify started “The Michelob Ultra Playlist Maker” in September, which llets runners create a personalized playlist to listen to while running. The music service and Michelob Ultra also combine to provide weather and other information based on the runner’s location. A special hub on the Spotify site that provides what has been determined to be the best running songs  at the moment.  Number one today is the album “High Hopes” by Panic at the Disco.