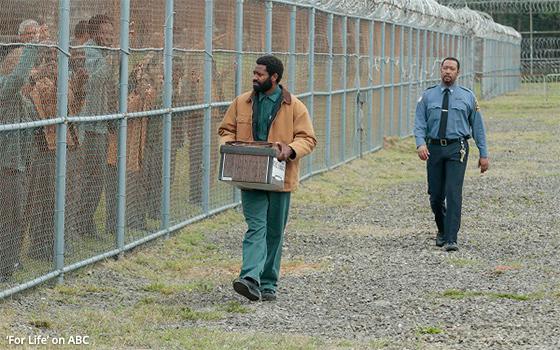 The TV Blog noted his charisma when the show premiered for its first season just last February. It returns for its second season this week, on Wednesday night.

Pinnock (seen in the photo above) has a way of making the character he plays seem more like a real man than one who is being played by an actor. Watching him, you don’t get the sense that he is acting at all.

That is how effective he is in the role of Aaron Wallace, a felon serving a long sentence in a New York state prison on a drug conspiracy conviction that Wallace insists was a frame-up.

In order to fight for his freedom, Wallace -- formerly a nightclub owner -- became a prison lawyer who argued his case all last season while facing long odds that he would ever succeed.

Last February, the opinion here was that the show’s storyline about this character’s battle to be released was well-rendered and believable.

But at the same time, the obstacles he faced at every turn from a justice system power structure that seemed determined to silence him made his situation seem hopeless.

“Watching this inmate-attorney struggle against almost impossible odds as the powers-that-be sneer at him and undermine him at every turn is a joyless experience,” said the TV Blog published last February 10.

But as the show starts its second season this week, there are glimmers of hope that Wallace’s efforts just might pay off. Let’s just say that in the premiere episode, he notches a couple of victories.

At the same time, he undergoes yet another prison beatdown by a group of thugs. On the other hand, even that incident might not be quite what it seems to be.

The good news is that the season premiere of “For Life” sets the stage for new directions in the series and in the life of Aaron Wallace. With Nicholas Pinnock in the lead role, Mr. Wallace is in good hands.

Season Two of “For Life” starts Wednesday night (November 18) at 10 Eastern on ABC.