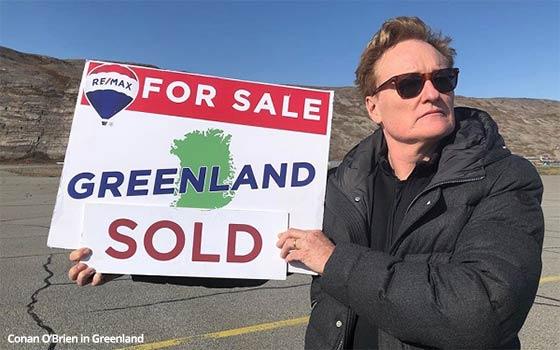 It seems like only yesterday that Conan O’Brien was plucked from the obscurity of the “Simpsons” writers room to replace David Letterman as host of “Late Night” on NBC.

Then, suddenly, 27 years went by in the blink of an eye. And this week, the news came that TBS is discontinuing “Conan,” O’Brien's nightly 11 p.m. show that has been on TBS for 10 years.

O’Brien, 57, will continue to produce content for WarnerMedia under a new agreement with his production company, Team Coco.

He will even host some kind of weekly variety show on HBO Max, the WarnerMedia streaming service, and produce more “Conan Without Borders” travel shows such as the one he filmed in Greenland last year (pictured above)

As I contemplate this milestone in TV history, gazing into space with a thoughtful expression on my face, I see myself starting to dissolve as memories of Conan come vividly to life.

His origin story remains shrouded in mystery. No one except his co-workers at “The Simpsons” knew who Conan was when Lorne Michaels declared that he would be the new host of NBC's “Late Night” in 1993.

At The New York Post, where I was then editor of the television section, we took up the opportunity to needle Conan in the manner of upperclassmen hazing a new fraternity pledge.

Inspired by the old “Gong Show” starring Chuck Barris (and created by him), I nicknamed Conan “The Unknown Comic” and for weeks we never ran a photo of him with his face visible.

In fact, we never ran a photo of him at all. Instead, we ran photos of the original Unknown Comic from “The Gong Show” and said it was Conan. No one knew the difference because the Unknown Comic always appeared with a brown paper bag over this head.

But plucky Conan withstood our relentless abuse (plus the abuse of others such as Washington Post TV critic Tom Shales who in September 1993 wrote one of the most negative columns about a newcomer that I think I have ever read).

On the Post's TV section staff, however, we had a young reporter who championed Conan. If memory serves, the two may have struck up an acquaintanceship stemming from a job the reporter, Josef Adalian, had had previously at The Boston Herald.

Joe was the best journalist on the television beat who I ever worked with, and possibly the best I have ever known too. Today, he writes for Vulture.com.

At any rate, we eventually took the paper bag off Conan’s head (so to speak) and our coverage of him in The New York Post became more appreciative.

For me personally, Conan eventually figured into the most fulfilling day I ever spent as a journalist on the TV beat -- the day in July 2000 when I spent something like six hours in the company of Mr. T.

This included hanging around with Mr. T backstage at “Late Night” as he awaited his turn to appear on the show -- the first of many he would eventually make with Conan.

The scene backstage at 30 Rock that day was very warm, easygoing and hospitable. I formed the impression that Conan and the people he worked with were a great bunch of people. And I have held onto that impression ever since.

I remember one year that a party was thrown by NBC to celebrate the show -- perhaps on a milestone season such as its 10th (though I have no memory of the ostensible reason for this event).

I believe the party was held at the Museum of Modern Art and I met Conan’s long-time producer, Jeff Ross, writer Rob Smigel (the man who created “Triumph, the Insult Comic Dog”), Andy Richter and Max Weinberg, Bruce Springsteen’s drummer, who was also leader of Conan’s “Late Night” band.

Later, Max sent me an autographed copy of a book he had written about drummers called The Big Beat: Conversations With Rock's Greatest Drummers. It remains a prized possession.

Please forgive the name-dropping here. I usually do not do that. I am not friends with these people. Our acquaintanceship is vague, at best. But there was always something about Conan O’Brien and his colleagues that bred familiarity.

A journalist covering a single beat such as television eventually comes to appreciate the people who make themselves accessible when an interview is needed. For the most part, getting Conan on the phone was not difficult, and I always appreciated that about him.

Oh, well. Like all good things -- the Trump presidency, Mad magazine, “Gunsmoke” -- Conan O’Brien’s run as a late-night talk show host had to come to an end sometime.

I hope that come next June, TBS allows him to produce an appropriate sendoff for himself. Giving him an hour to say good-bye -- rather than the half-hour they shortened him to in January 2019 -- would be a good place to start.