New 'Saved By The Bell' Makes Me Wanna Screech 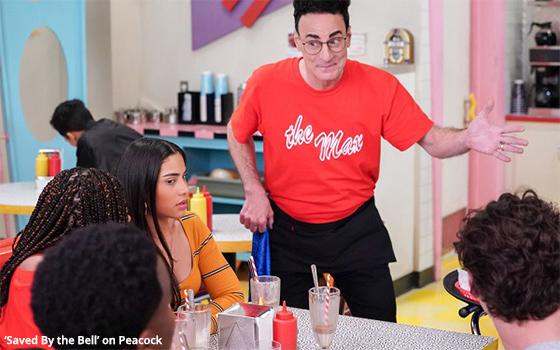 The new “Saved By the Bell” might have simply come to TV as a lighthearted teen comedy about high school.

But instead, just like so much else in our society today, the makers of this revival felt that this modern-day version of a sitcom from the early ’90s (1989-93, to be exact) needed to be an integration story about the contrast between the struggles of inner-city ethnic groups and the relative ease with which high schoolers in a prosperous California suburb live their teen lives.

Thus, a show that could have been fun -- and more importantly, funny (heaven forbid) -- turns into a dreary exercise in social empowerment.

You might even classify this new “Saved By the Bell” -- premiering next week on NBCUniversal’s subscription streaming service, Peacock – as an example of “sitcom activism.”

That’s the way of the world these days, isn’t it? Select a new sitcom on a streaming service’s content menu expecting to be entertained and have a few laughs, but instead you are confronted with issues of race and class that are not funny at all.

Let me please remind you here, in case you forgot already: I am talking about “Saved By the Bell,” a sitcom that was so feather-light in its original version that it would have floated away in a gentle breeze if it was not nailed down.

And now, a new version of this lighter-than-air TV show wants to preach to us about society and its ills. It is enough to make a sitcom viewer screech, but the problem with that is, the character from the original series known as Screech is nowhere to be found in this new one (although the malt shop waiter seen in the photo above is apparently meant to stand in for him).

Screech was the old show’s resident dweeb, played by Dustin Diamond, who seems to be the only living former co-star of the old series who was not invited back to take up an adult role in the new one.

Those who have returned include Mark-Paul Gosselaar (Zack), Mario Lopez (Slater), Elizabeth Berkley Lauren (Jessie), Tiffani Amber-Thiessen (Kelly) and Lark Voorhies (Lisa), who was not seen in the premiere episode that the TV Blog previewed on Thursday.

The high school is the same -- fictional Bayside High -- where Slater is a gym teacher and coach. As the new series opens, Zack is married to Kelly and also governor of California.

Somehow, decisions Governor Zack makes about education spending in the Golden State lead to the closing of a number of schools in lower-income communities, leaving the kids there with no schools to attend.

As a result, in a modern-day version of a 1960s busing story, the inner-city kids are sent to suburban schools such as Bayside High where they are challenged to adapt to surroundings that are portrayed as culturally unfamiliar to them.

And that is the situation of this situation-comedy. It is a lot of social grist for a TV sitcom like “Saved By the Bell” to chew on.

The fact is, the show started out as a very funny sitcom that seemed like it was shaping up to be better than the original. But then it got bogged down in issues of income equality, and the comedic air got sucked right out of it.

The revival of “Saved By the Bell” starts streaming on Wednesday (November 25) on Peacock.