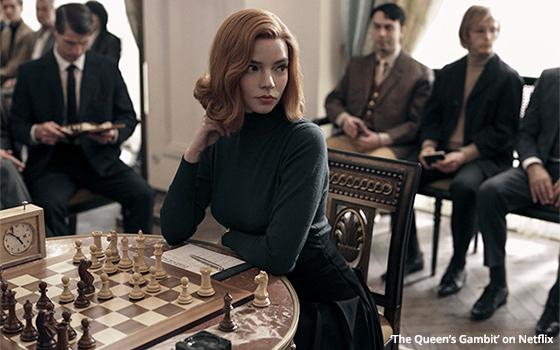 Netflix says its current limited series, “The Queen’s Gambit,” which profiles a young woman's chess-playing abilities in the 1960s, has hit a major viewing milestone worldwide.

The premium streaming platform says the series has been seen in part or as a whole by a “record-setting” 62 million global households in terms of views, in its first 28 days -- the best result for any “limited series,” the company says.

Nielsen’s ongoing “Tiger King” series took in 64 million views in its first 28 days. Netflix counts views by measuring whether a household account watches at least two minutes of a series or movie.

In the U.S., Nielsen says, “Queen’s Gambit” has amassed 551 million viewing minutes of the show over its first three days of release for the week ending October 25 -- putting it in tenth place among Nielsen's weekly top-ten streaming show list.

Netflix says show has made the top 10 in 92 countries and was number in 63 countries, including the U.K., Argentina, Israel, and South Africa.

The series has seen a major boost in Russia, Hong Kong, France, Taiwan and Australia, and there is strong consumer spending and interest around the series.

According to Goliath Games, a chess set maker, sales have increased over 170%. In addition, the number of new players has increased five fold on Chess.com.