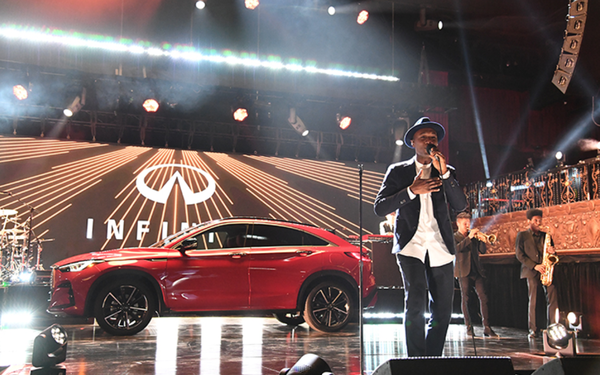 Infiniti was forced to pivot last week from a splashy, star-studded auto show event to a live-streamed reveal of its QX55 “classy” SUV.

The 35-minute (yes minutes, not seconds) video of the reveal plus concert has already garnered more than 14,000 views and climbing on YouTube alone. With attention spans reportedly becoming shorter and shorter, the idea of holding court for 30-plus minutes seems almost unfathomable.

If you are wondering who is calling the SUV classy, it would be none other than retro soul singer-songwriter Aloe Blacc, who joined the reveal to give a mini-concert with the new model as the background. He says he wouldn’t perform at just any vehicle reveal.

“I think because of the kind of music that I make and the reputation that I have, a brand that represents timelessness and classiness is really important,” Blacc tells DriveTime. “A brand that is synonymous with luxury, and represents a high quality, is the company that I want to work with.”

Blacc also was featured in a 30-second teaser for the vehicle ahead of the unveiling.

The star says he was attracted to Infiniti’s integrity, as well as its quality.

“I have to believe in the quality of the product that they create,” Blacc says. “It also starts with the integrity of the company, whether they are operating in a way that is beneficial for society and for people. I base a lot of my decisions on if a company is treating their employees well, treating the earth well, and adding benefit to people's lives.”

Like most of the vehicle unveilings of the past 10 months, the QX55 reveal was intended to be a live presentation at a motor show press conference, in this case the LA auto show.

“The virtual event offers much greater flexibility and opportunity for innovation, but requires more advanced content production and pre-planning,” York tells DriveTime. “We need to get the audience (media and consumers) to ‘come to us’ online, rather than being a captive audience at a motor show. We need to work harder in advance to ensure we have engaging (entertaining and informative) content and target the audience through personal invitations and paid media."

The other big difference is on the day itself, he says.

“With the virtual event, it’s all ‘in the can’ weeks in advance, so the day itself is all about internal engagement and responding to media queries, rather than the last-minute preparations of staging the conference,” York says.

Another upside is more consumer engagement with live-streamed events.

“We’re obliged to think longer and harder about how to capture consumer attention, and set the content accordingly, like the choice of Aloe Blacc to appeal to QX55 buyers,” York says. “We will reach millions of consumers online with this content, which is much more engaging for consumers than the traditional motor show press conference format.”

Pandemic or not, there will likely be more virtual events, or hybrid events, combining a virtual broadcast and physical reveal, he says.

“We’ve learned a lot about the powerful potential for this kind of engaging brand content,” York says. “It will never fully replace the human need or desire to meet with journalists and consumers face to face — and to ‘touch the metal’ — so a combined format may be an interesting option in the future, and one we’re actively exploring.”