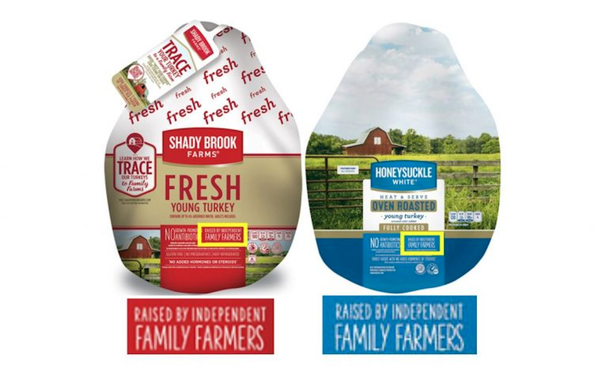 The groups’ complaint alleges that certain of Cargill’s packaging, social media and website representations lead consumers to believe the turkeys used in the company’s products are raised by independent family farmers.

“Cargill is egregiously misleading consumers with these representations, because the Products are in fact produced on large, corporate-controlled factory farms,” the complaint states.

They are asking the FTC to “enjoin the dissemination of false or deceptive advertising” by Cargill—the country’s largest privately held company.

In this Honeysuckle White video posted July 14, 2020 on YouTube, the voiceover describes “great-tasting turkey raised by independent family farmers with care.” Visuals of parents and kids are accompanied by the words “these hard-working farm families.”

“Unfortunately, there are companies like Cargill that are filling that demand with substandard-type products,” Maxwell tells Marketing Daily. “These types of [advertising] practices deceive the consumer into thinking that they’re getting what it is they’re searching for in the grocery store.”

Asked whether it’s possible that Cargill uses any independent family farms, Maxwell says, “We do not have a list of all their producers because you can’t obtain that. I will tell you that label claims have to have an affidavit by the producer, and that affidavit is to be kept at the processing plant, at the slaughterhouse. Those are not public documents.

“It could very well be that some of the turkeys coming from Cargill, they could buy them on the open market. We believe that’s very, very doubtful. And even if they do, it doesn’t fix the problem because the volume of their sales and their business model strongly supports that they own these birds.”

Marketing Daily reached out to Cargill for comment but had not heard back by deadline.