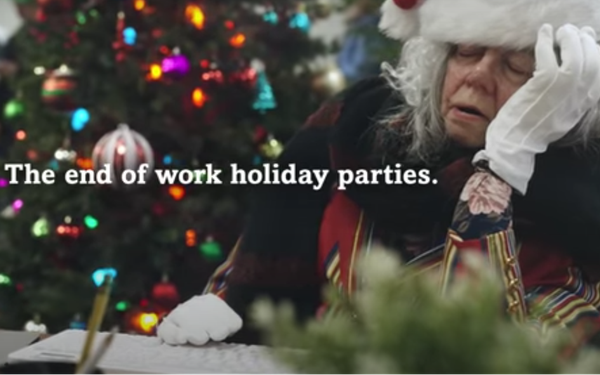 Once this pandemic is over, maybe it’s time to rethink this whole holiday party thing.

After Heineken released a holiday ad last week that attacked the schmaltz and tension of family dinners during the holidays, Miller Lite has weighed in with its own holiday ad blast aimed at office parties.

Its 45-second video ends with a  printed message that reads, “One good thing to come out of 2020? The end of work holiday parties.”

The people we see in the ad — the young woman crying her eyes out, the office disc jockey who’s turned autocratic and, of course the doofus Xeroxing his rear end — are really hyperrealist statues of people you may cringe to remember from holiday parties in the past.

The amazingly lifelike art is part of an exhibit titled “Farewell, Holiday Parties” by noted artist Alex Prager, an exhibit at the Los Angeles County Museum the brand helped engineer. A longer version of the ad, with a little more detail about the party, is available at the museum’s website.

"With many companies nixing the traditional holiday party, we're focused on the silver lining: more time with a few real friends, which is what Miller Time is all about," said Courtney Carter Dugan, director of activation for Miller Lite,  "Not having to make awkward small talk or being forced to take photobooth pictures with coworkers is a holiday gift in and of itself."

Prager was given free reign to “design” the party with 15 guests. “This year has been a disaster in terms of connecting with people we share common realities with, so I was very excited to work on a project that is ultimately about love and the human condition seen through an elegant and humorous lens," he stated.

The campaign was created in partnership by DDB Chicago and San Francisco, and its message is that the opposite of that holiday party are the get-togethers you’re actually looking forward to, with friends and family.

That’s Miller time. You see a glimpse of a happier scene, with real people, at the tail end of the spot. Miler promises “robust market exposure” for the ad, including TV, social, digital and public relations components.