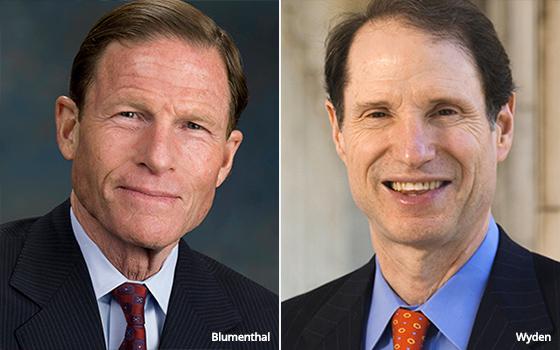 Two Senate Democrats and a coalition of digital rights groups are hoping to derail the confirmation of telecom lawyer Nathan Simington to the Federal Communications Commission, arguing that his appointment during the lame-duck session would hamper President-Elect Joe Biden's policy agenda.

Sen. Richard Blumenthal (D-Connecticut) added that Simington is a “deeply dangerous” nominee, and that his appointment would likely result in gridlock at the agency.

“In the midst of a pandemic, what we need is an FCC commissioner who will champion broadband, connectivity, devices, for the 16 million Americans or more who lack access to the internet,” Blumenthal said.

Last week, the Senate Commerce Committee voted 14-12 along party lines to advance Simington's nomination. Senate Majority Leader Mitch McConnell has signaled that the full Senate could vote on the nomination as early as Tuesday.

Blumenthal, Wyden and groups including Public Knowledge, Free Press and Fight for the Future oppose the nomination.

Blumenthal said Monday that Simington's “sole qualification” for the job is that he was “more than happy to do the president's bidding,” referring to his role in trying to weaken Section 230 of the Communications Decency Act.

President Trump nominated Simington to the agency after withdrawing the re-nomination of FCC Commissioner Michael O'Rielly, who publicly suggested the agency should refuse to consider Trump's request to gut Section 230 -- the 24-year-old media law that undergirds the modern web.

Simington, a senior adviser at the Commerce Department's National Telecommunications and Information Administration, helped write the agency's petition to the FCC for rules to weaken Section 230. He also reportedly attempted to influence Fox News' coverage of controversies surrounding Section 230.

Wyden referred Section 230 when listing his reasons for opposing Simington's nomination, saying that the “last thing we need right now” is for the government to police speech.

Trump directed the Commerce Department to petition the FCC to regulate social media after Twitter flagged two of his tweets with misleading statements about vote by mail.

Gaurav Laroia from Free Press added Monday that Simington's “willing participation” in Trump's effort to weaken Section 230 “should be disqualifying.”