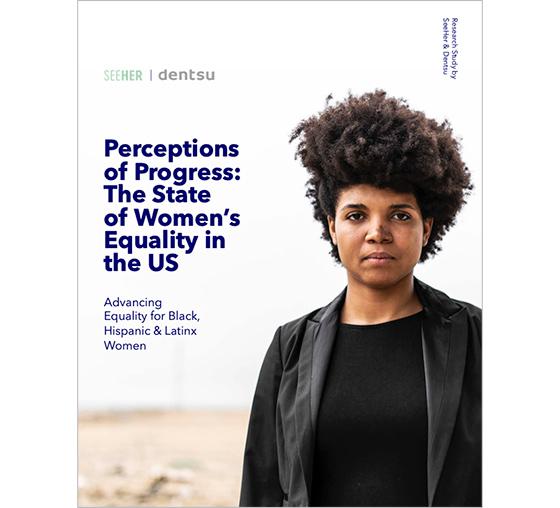 Dentsu and ANA’s SeeHer, an industry group dedicated to achieving gender equality in media, advertising, marketing and entertainment, have released the second part of an  in-depth gender study, “Perceptions of Progress: The State of Women’s Equality in the US.”

The first installment of the report was released in October.

Part II finds that women generally expect brands to improve gender equality and that White, Hispanic and Latinx women have high expectations that brands will spark change. But the report also finds that Black women are less like likely to trust brands to take the steps necessary to accomplish that.

“Hispanic and Latinx women are more likely to feel urgency around a lack of female role models for their community,” the report states. But Black women, who face both racial and gender discrimination “feel that sexualization/harassment and persisting stereotypes contribute significantly to the inequality they face.”

The report explores the pay gap women face noting differences in the severity of the gap depending on race and culture. White women, for example are paid 21% less than their White male counterparts. But Black women are paid 38% less and Hispanic and Latinx women are paid 45% less.

“This clearly shows that achieving equality for all women requires more than just focusing on gender rights but addressing the specific barriers that women of color face,” the report asserts.

And while brands have their work cut out for them in developing programs to drive change, more is required, including collaboration among brands, the media, schools and more, per the report. “Brands and media should consider how they can partner with schools and/or educational organizations to eliminate barriers for young women.”

Activism around gender equality “has tended to place White women’s rights before those of Black or Brown women,” the report finds.

As such, it concludes that women of color, “particularly Black women are left behind.” Marketers in turn, “have a chance to redefine that relationship and correct the power imbalance.”

The complete findings from Part II of the report can be accessed here.