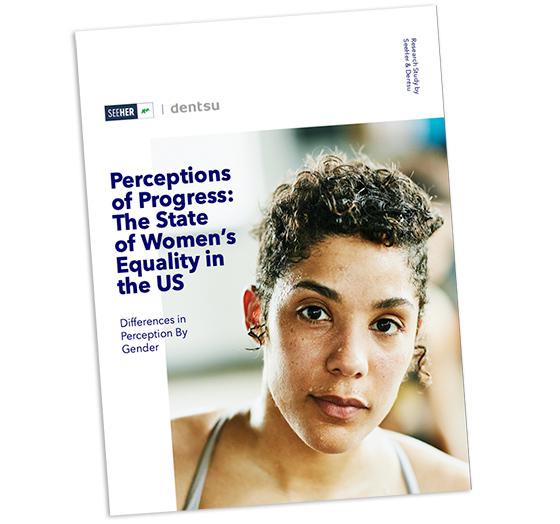 Denstu has joined forces with ANA’s SeeHer, an industry group dedicated to achieving gender equality in media, advertising, marketing and entertainment. It’s the first such partnership SeeHer has struck with an agency holding company.

The partners’ first major project is an in-depth three-part gender equality study, Perceptions of Progress: The State of Women’s Equality in the US.”

The first installment, released today examines consumers’ attitudes around the progress and barriers to gender equality as well as the role brands should be playing to achieve it.

“An overwhelming majority of Americans believe that gender inequality is an important issue in the US.,” the report concludes. “However, the results of our research suggest that women and men feel differently about progress, the pervasiveness of the issue and what should be done about it. It appears that men tend to be overly optimistic about progress made, in turn making them less attuned to the persisting inequalities that women face.”

Those findings are “worrisome” the report added, “because people’s concern with inequality ultimately predicts their willingness to address it. It is crucial to bridge that disconnect to maintain a sense of urgency around women’s equality and keep us moving forward, together, to create and accelerate change.”

The research, administered through Toluna (and its nationally representative panel of 800 respondents), found that 58% of Americans say women have a lot of responsibility to improve women’s equality, while only 50% of Americans say the same about men. By gender, men put more of the onus on women than women do (55% women/61% men), but both sexes place some responsibility on men’s shoulders (49% women/51% men).

Brands, media and agencies need to do more, the report concludes. “The continued objectification of women is a persisting issue both in women’s experiences with harassment and in media representations that reduce them to their physical appearance.”

Another issue, per the report, is “the underrepresentation of women in positions of leadership, both literally in the boardroom and figuratively on screen.”

Both genders equally believe that brands bear much of the responsibility for improving women’s equality (45%, respectively). However, there are differences between how men and women say brands can take action.

Women especially want to see brands commit to increasing female leadership within their own organizations (56%) as well as to better represent women in ads (55%). Within ads, women want to see more women represented in leadership positions (48%) and in ‘real-life’ situations (47%). They are more likely than men to want to see ads reflect increased diversity (38% women/31% men) and for brands to commit to stop retouching (35% women/31% men).

In what the report called “an encouraging sign,” men want to see more realistic portrayals of women in advertising as well (49%), and 51% want to see women shown in leadership positions and in more ‘real-life’ situations, respectively. Additionally, men appear to feel more strongly about women’s representation in stereotypically ‘male’ arenas than women (32% women/37% men).

The study reports that Americans seem very confident that the next decade will see more female leaders in male-dominated arenas and that more women will rise to the top in business and politics.

But less confidence is expressed that true equality is close to being achieved. Only 40% of respondents “strongly agree” that equality will be achieved in their lifetime and 25% are skeptical.

“This presents a departure from consumers’ hope around the current state of equality and indicates that even with strong progress in the next decade, Americans feel there is a long way to go,” the report surmises. It cites a recent World Economic Forum projection that it will take roughly 150 years to close the existing gender gap (with regards to economic opportunity and financial parity) in the US.

And McKinsey estimates that women are 1.8 times more vulnerable to the pandemic’s impact than men.

Dirk Herbert, Chief Strategy Officer, dentsu Americas and a co-author of the report stated, “This study seeks to not only uncover the main disconnects between Americans’ perceptions of the state of gender equality and the reality of women’s experiences, but also offer a point-of-view on how media, brands and consumers can work to bridge those gaps on the path towards equality.”

Nadine Karp McHugh, President, SeeHer – ANA added that the new research is “a powerful mandate for change… The data reminds us that gender equality is not a woman’s issue, it’s a societal issue. And the SeeHer movement is uniquely positioned as a catalyst to impact change.”

The partnership’s future efforts, all designed to foster change will include education, measurement/testing and advocacy projects.