Vizzy Wants Your Love Exclusively, Aims To Woo Drinkers Away From White Claw 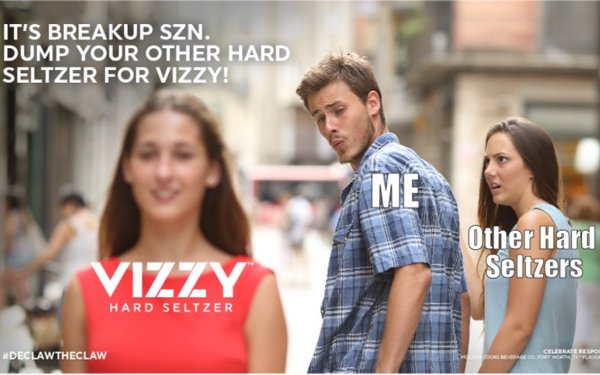 Vizzy, a hard seltzer brand from Molson Coors Beverage Co. is now trying to increase sales with a contest designed to get drinkers to unfollow market Goliath White Claw on social media.

The prize is nominal: It will give 5,00 winners of the #DeClawTheClaw contest a free 12-pack. One person wins a year’s worth of Vizzy, worth $500.

Molson Coors says there are now an amazing 156 hard seltzers on the market. But White Claw was the one that started the mania, back in 2016. It dominated the market then, and now, in part because of its strong presence on social media. Vizzy has become the fifth best seller since its debut in April. ts unique selling point is that, unlike other hard seltzers, Vizzy contains antioxidant Vitamin C and an array of flavors.

The attack on White Claw’s social sites is fairly full-frontal. To enter the contest, Vizzy drinkers have to send a photo to Instagram or Twitter “proving you are not following White Claw.” That would seem to mean a screenshot that “proves” you have rejected White Claw, even if that is just for as long as it requires to take the photo and send it to Vizzy.

“We hope they would stay with Vizzy, of course," said a spokeswoman. Molson Coors has seemed to equate the #DeClawTheClaw contest with dumping your beau/sweetheart.

"Social trends show that mid-December kicks off what is known as break-up season, when couples evaluate their relationships and realize they deserve more from their partners before heading into the holidays or a new year," said Elizabeth Hitch, Vizzy senior marketing director. "Vizzy believes you should never, ever settle. That's why we're helping consumers get the hard seltzer they deserve."

If Vizzy does not do, however, Molson Coors has more hard seltzers to choose from. Earlier this month the company said it was increasing its capacity to manufacturer seltzers to accommodate Vizzy and Coors Seltzer, both launched in 2020, and Proof Point and Topo Chico, seltzer products that will launch next year. Topo Chico is a joint venture with Coca-Cola.

BeverageDaily reported Molson Coors has increased its hard seltzer production by 400% this year,

The company says Vizzy, Coors Seltzer and a new wheat beer brand extension Blue Moon LightSky are three of the top 20 best-selling new innovations in the beer and flavored malt beverage (FMB) category this year, according to Nielsen.

And significantly, Molson Coor just announced a production deal to make 750 million slim cans, the type of container used for hard seltzers. That seems to indicate Molson Coors, which substituted “beverage” for  “brewing” from its corporate name at the beginning of the year, has decided hard seltzer is no flash in the pan.