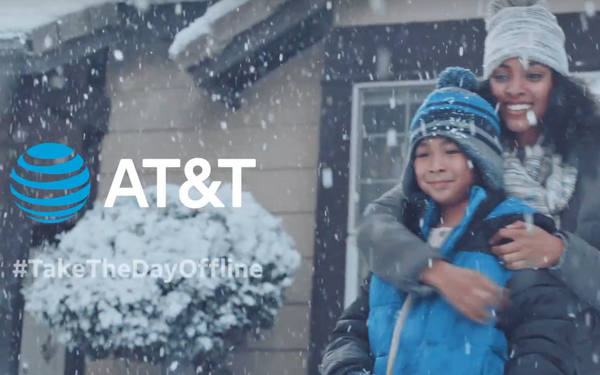 AT&T wireless ends the year with two new touchy-feely ads that don’t seem to have much of a marketing purpose beyond presenting the communications giant in a gentle way.

One gives a little showcase for NBA superstar LeBron James and actress Milana Vayntrub, who played effervescent AT&T shop clerk Lily in commercials from 2013-16 and again this year.

The ad, titled “Little Love”   shows a bunch of city dwellers going about their business, when,  aided by a smartphone, they begin singing a version of 1968 Jacke DeShannon hit, “Put A Little Love in Your Heart.” Lily’s walking down a chilly wintry street and LeBron’s on a living room couch feeling the lyrics. Another guy with a booming bass voice, is ironing. One young pizza delivery man sings into an apartment building intercom and motivates the guy who made the order on the other side to start singing too.

The ad was created with creative agency partner BBDO NY and directed by The Corner Shop’s Peter Thwaites. So far, it will only be seen on YouTube and ATT.com, starting Dec. 24.

In March, James and AT&T entered into what they called a strategic partnership “to use technology, entertainment and innovation towards social advancement and to promote new AT&T products and services.”

As part of the deal, AT&T is developing a learning institute at his foundation’s I Promise Village. The basketball superstar’s SpringHill Entertainment production company is also working with AT&T’s WarnerMedia to develop the upcoming “Space Jam” film and programs, “The Shop” and “Student Athlete” for HBO.

As for Lily, she might be worried about her real-life AT&T store contemporaries. As the pandemic has gotten far worse again, Apple over the weekend closed all its  stores in California and others in London and around the world. The Verge estimates a total of 100 Apple stores worldwide are shuttered. AT&T, Verizon and others haven’t followed yet, but all of those phone stores and Apple closed for a while at the beginning of the pandemic.

The other ad, "Take The Day Offline," is more or less ripped from today’s pandemic feature story list. It shows a harried mom trying to get her young son away from a mountain of newly fallen snow in the front yard so he can begin another day of his school’s home learning instructions online. But, in a surprise move, his teacher declares, “It’s a snow day! Get outside!” His WFH mom quickly takes a snow day too. Everybody’s happy.

During last week’s big snowfalls, parents and teachers also confronted the same question. In a stressful year, many thought, give the kids a break.