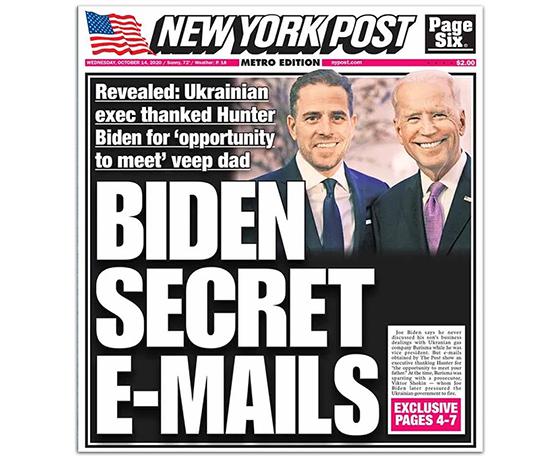 Twitter -- which faced criticism for spreading fake news during the 2016 election cycle -- promptly restricted users' ability to share the Post's article, citing a policy against distribution of “hacked” materials. The Post's article was based on an email supposedly recovered from a hard drive that had been abandoned by Hunter Biden at a computer repair shop in Delaware, and then provided to an attorney for former New York City Mayor Rudy Giuliani.

But the web company's move to suppress a piece from a widely recognized newspaper prompted a backlash, and Twitter quickly retreated. It restored people's ability to spread the article and announced it would no longer remove “hacked” content, unless shared directly by the “hackers.”

That decision didn't put an end to the controversy. This week, the owner of the computer repair shop, John Paul Mac Isaac, sued Twitter for defamation.

He says in a complaint filed in federal court in the Southern District of Florida that he “is not a hacker” and that he “lawfully gained access to the computer” when its owner brought it in for repair, and then failed to reclaim it.

Isaac adds that, as a result of Twitter's labeling, he “is now widely considered a hacker.”

He also says he began to receive bad Yelp reviews the same day Twitter restricted the Post's story. An Oct. 14 Yelp review attached as an exhibit to his lawsuit says, “They like to hack their customers computers and inject themselves erroneously into politics.”

He added that he "had to close his business" as a result of Twitter's label.

Twitter declined to comment on the lawsuit. On Tuesday, a judge in Florida publicly entered an order dismissing the lawsuit on the grounds that the case shouldn't have been brought in that jurisdiction. That dismissal was without prejudice -- meaning that Isaac can bring it again in another locale.

If he does, it's not clear how far this case will get in court. Much might depend on whether Twitter's initial labeling of the post can be interpreted as a statement that the computer shop -- and not some other party involved in the chain of events that resulted in the article -- was a “hacker.”

It's worth noting that Twitter's initial decision to restrict the Post's article gave new fuel to people who want to revise Section 230 of the Communications Decency Act -- which immunizes companies from liability for moderating content. The First Amendment also protects those content moderation decisions, but Section 230 often gives web companies a quicker path to victory when they're sued.

But while Section 230 is a powerful legal tool, it doesn't protect web companies from liability for their own speech.

Twitter isn't the only social media company to face a lawsuit over how it describes disputed content.

Facebook -- which allowed Russian propaganda to spread during the 2016 election cycle -- currently faces a libel lawsuit over its decision to attach a label reading “Russia state-controlled media” to social media pages operated by Maffick.