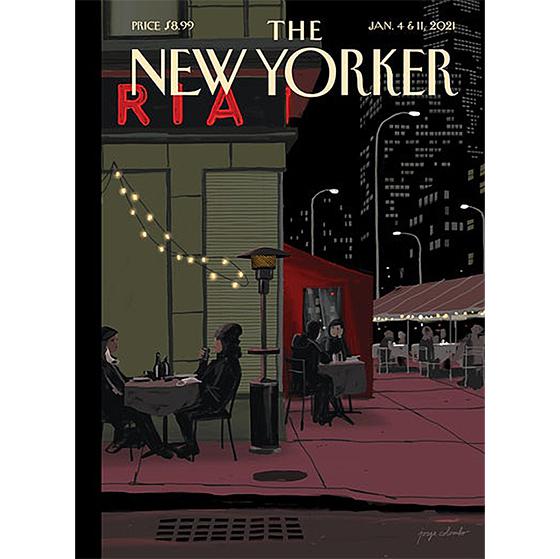 The New Yorker is dedicating nearly its entire January 4-11, 2021 issue to a feature story called “The Plague Year” by staff writer Lawrence Wright.

The 40-page report looks at how the U.S. mishandled the response to the COVID-19 virus. It details early reports of the virus at the White House, mask mandates, testing rollouts and the emergency-use authorization of the vaccine.

The New Yorker rarely devotes a magazine issue to one topic.

The cover of the issue — “Bright Lights” by Jorge Colombo — features an illustration of people dining outdoors in the winter.

Wright’s story follows the experience of deputy national security adviser Matt Pottinger, a former Marine and China correspondent for The Wall Street Journal and Reuters, as the pandemic spreads and the White House reacts.

“The magnitude of our failure is unparalleled,” Wright tells New Yorker editor David Remnick in an interview for “The New Yorker Radio Hour.”

Wright is also the author of “Going Clear: Scientology, Hollywood, and the Prison of Belief,” “The Looming Tower: Al-Qaeda and the Road to 9/11” and “God Save Texas: A Journey into the Soul of the Lone Star State.”