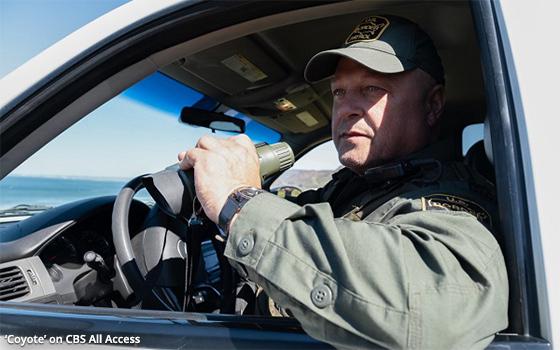 A new six-part drama series premiering this week on CBS All Access brings Michael Chiklis back to television in the kind of role that made him famous.

In the series, titled “Coyote,” Chiklis (pictured above) plays a veteran border patrol officer in southern California who is on the cusp of retirement.

Looking forward to a life of leisure in a remote vacation cabin south of the border that he hopes to finish building, he nevertheless becomes embroiled shortly after retiring in the ongoing issue of cross-border immigration that he policed in his profession, but that he is now experiencing literally from the other side.

By its nature, “Coyote” will remind many of Chiklis' best-known previous work -- his portrayal of the tough, corrupt, rule-breaking L.A. cop Vic Mackey in “The Shield.”

Although that show ended its run 12 years ago, Chiklis looks more or less the same as he steps into the role of border patrol officer Ben Clemons, who is decidedly more by-the-book than Vic Mackey ever was.

But he has the same intense toughness as Mackey and the overall look of “Coyote” bears similarities to “The Shield” too. That show was known for its gritty, downscale locations, handheld camera sequences and quick-cut editing. “Coyote” has much of that same intensity.

The title refers to a slang usage of “coyote” that has come to refer to a person who helps smuggle illegal aliens from Mexico to the United States.

The title is also a reference to the desert locale of this TV show, which was filmed mostly in and around the arid area in which it takes place -- the borderlands that separate California from the Mexican state of Baja California.

The show's best feature is Chiklis, who is evidently in his element in a role like this one. Not surprisingly, he is great in the role, which fits him like a glove.

This show has only six episodes, all of which will drop this coming Thursday (January 7) on CBS All Access

It was produced originally for ViacomCBS-owned Paramount Network, but like so much content lately, this one has been diverted from basic cable directly to the company's subscription streaming service.

It is another sign, among many lately, of where TV is heading as the industry begins the new year.

“Coyote” starts streaming on Thursday (January 7) on CBS All Access.