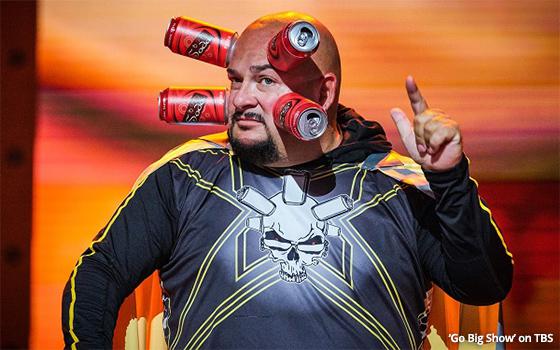 The guy in the photo above has cans stuck to his head. Welcome to a new year of TV!

Can Man comes to us courtesy of TBS and its new “Go-Big Show,” a talent competition that premieres this coming Thursday.

The title derives from the popular admonition “Go big or go home.” Thus, the competitions on display here are supposed to be “big” -- i.e., risky, unusual, never-before-seen or a combination of all or some of these.

In the case of Canhead, this talent to stick cans to his face -- without the evident aid of glue or any other adhesive material -- stems from some sort of rare condition he was born with in which his pores give off more “suction” ability that those of other, “normal” human beings.

Anyhow, this is the explanation he provided in the premiere episode of “The Go-Big Show” that the TV Blog previewed the other day.

Like the other contestants seen in the one-hour episode (actual running time: 44 minutes and two seconds), The Man With the Amazing Suction Pores came on “The Go-Big Show” to wow the show’s judges and to compete against others with talents or abilities that qualify as “big.”

These included a female circus performer who swung multiple flaming hula hoops around her hips while balanced on a large rubber sphere; and another young woman -- a gymnast, acrobat and self-described “foot archer” -- who stood on her hands and shot bull's-eyes upside-down with a bow and arrow that she operated and shot with her feet. Oh, and the second arrow she shot happened to be flaming also.

With these and other acts that are equally outlandish, this new series earns its title. The contestants do indeed “go big,” and half of them do “go home” after a vote by the show's four-judge panel decides the winner of each round of one-on-one competition.

Before watching “The Go-Big Show,” the TV Blog had every expectation that this show would amount to a ridiculous waste of time. It did not necessarily turn out this way, however.

The Amazing Can Man and His Peculiar Pores notwithstanding, most of the acts provide the show's viewing audience with considerable edge-of-your-seat suspense. However, some of that suspense involves wondering if any of the contestants will be seriously injured.

“The Go-Big Show” is hosted by a comedian named Bert Kreischer. The four-judge panel is made up of pro wrestler Cody Rhodes, actress Rosario Dawson, country singer Jennifer Nettles and the ubiquitous Snoop Dogg.

In the final analysis, “The Go-Big Show” delivers what its title promises. Everyone -- including the contestants, host and judges -- goes big, and nobody gets hurt.