What's The Point? New Sitcom Is Parade Of Stereotypes 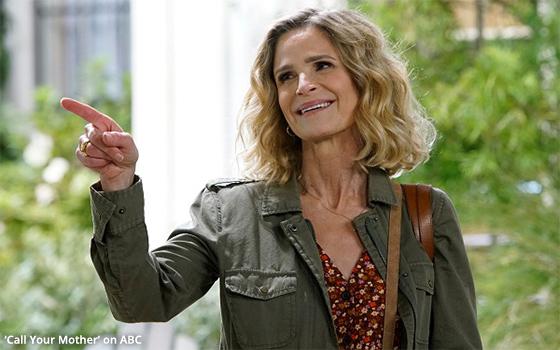 The new ABC sitcom “Call Your Mother” might have fared better in this TV Blog if the network had provided more than just the show's pilot for preview.

The episode was such an excruciating experience to watch that I would have at least sampled a second episode out of a sense of fairness to all involved. But alas, there was no other episode available that may have represented an improvement on the pilot.

Those involved in “Call Your Mother” include Kyra Sedgwick (pictured above) in the maternal title role, and producer Kari Lizer, who was executive producer of the Julia Louis-Dreyfus sitcom “The New Adventures of Old Christine.”

In “Call Your Mother,” Sedgwick plays a single, “mature” mom (Sedgwick is 55) living in Iowa whose two grown, 20-something children live in Los Angeles. They do not call her enough (hence the show's title), so in the series premiere she hightails it to L.A. to find out why.

And what, pray tell, is the reason they don't call as often as she would like? Spoiler alert: They're busy leading their own lives. And that's the show.

Without access to Episode Two, it can only be assumed that once Mama Kyra establishes herself in L.A., she will now stay there to reconnect with, and bedevil, her kids. This assumption is made because if she didn't stick around, there would be no show.

Based on the experience of watching the pilot, there is not much of a show here in any case. In addition to this show's razor-thin premise, its characters represent a dreary parade of prime-time sitcom stereotypes.

These include the high-strung maternal empty-nester who cannot let go, the grown children who whine and complain about their lives, the son's empty-headed girlfriend whose occupation is “social media influencer” and the grown daughter's young African-American gay roommate.

One reason why a subsequent episode of “Call Your Mother” may have been helpful is because this show suffers from a very acute case of pilot-itis.

This is a condition that gets mentioned from time to time in these TV Blogs in which every character, as well as a show’s over-arching “situation,” needs to be explained in minute, forced detail in the very first episode in the constricted time frame of just 22 minutes.

The TV Blog understands that exposition is necessary in the setting up of a new TV show for audiences who are encountering it for the first time. But the entire premiere episode of “Call Your Mother” plays like a program-length exercise in setting up the show.

And even after being on the receiving end of all that effort, it is difficult to care very much whether this mom reconnects with her children or not.