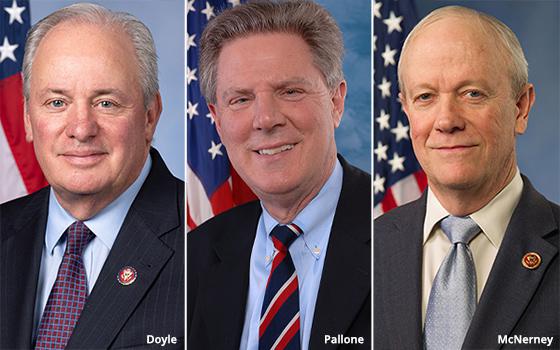 Democrats on the House Energy and Commerce Committee are questioning internet service providers over broadband pricing, data caps and other policies affecting people's ability to use the internet.

“As our nation continues to confront both a public health and economic crisis, it is critical that Americans have access to reliable and affordable internet service,” Reps. Frank Pallone, Jr. (New Jersey), Mike Doyle (Pennsylvania) and Jerry McNerney (California) say in letters sent to nine broadband providers including AT&T, Charter and Comcast.

“Unfortunately, what cannot be overlooked or underestimated is the extent to which families without home internet service -- particularly those with school-aged children at home -- have been left out and left behind,” the lawmakers add.

The letter notes that last spring, more than 700 internet service providers signed on to the Federal Communications Commission's “Keep Americans Connected” initiative. Those companies promised to refrain from terminating service to residences or small businesses due to customers' inability to pay bills, and to waive late fees. That pledge expired in June.

Since then, some companies moved away from those policies, the lawmakers write.

“One major internet service provider is raising prices on its internet plans and re-imposing -- and expanding the reach of -- data caps on home internet plans,” the lawmakers say, referring to Comcast's recent decision to impose new data caps of 1.2 Terabytes per month on subscribers in 14 Northeast and mid-Atlantic states and the District of Columbia.

“This is an egregious action at a time when households and small businesses across the country need high-speed, reliable broadband more than ever but are struggling to make ends meet,” the letter continues.

Comcast says 5% of its customers use more than 1.2 TB of data per month.

Currently, Comcast deploys usage-based billing across around two-thirds of its footprint, but not in the Northeast and mid-Atlantic -- where the broadband carrier faces competition from Verizon's Fios. Comcast suspended all data caps last March but reinstated them last summer; at the time, Comcast also raised the cap to 1.2 TB per month, up from the prior maximum of 1 TB per month.

In November, Comcast announced plans to expand that 1.2 TB cap throughout its U.S. footprint. Subscribers who consume more than that amount will be charged an extra $10 per 50 Gigabytes, unless they pay more for an unlimited data plan. The move is expected to take effect in April.

Pallone and the others are asking the broadband carriers to answer a host of questions, including whether they have raised prices since the start of the pandemic, imposed new data caps, or disconnect people who were unable to pay their broadband bills.