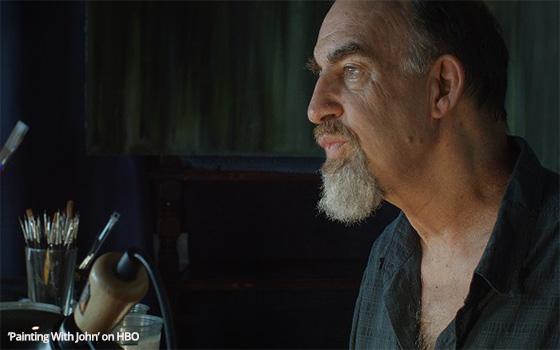 Watercolorist John Lurie starts out his new, six-episode, first-person art series “Painting With John” with a contrarian point of view about, of all people, Bob Ross.

“Bob Ross was wrong,” the decidedly brooding Lurie asserts in the show. “Everybody can't paint. It's not true.”

Ross was the bushy-haired painter-entrepreneur who brought landscape painting to the masses with his mail-order instructional painting kits that were augmented by his TV show, “The Joy of Painting.” Production on the show ended with Ross’ death at age 52 in 1995 but repeats are still seen on PBS stations.

On the show, Ross did indeed express the optimistic (and, let's face it, commercially motivated) opinion that anyone could learn to paint according to a method that he devised. “It's your world,” Ross would say as he encouraged his audience to relax and paint scenes according to their own unique way of viewing their environments.

He became famous for his sunny “anyone can do it” attitude about painting. In his world, the sky, sun, clouds, trees, mountains and waterways he painted possessed human traits -- including his “happy little trees,” which is a phrase for which he is widely remembered.

Lurie, 68, is a multifaceted artist -- musician, composer, painter, actor -- who apparently rates his own documentary-style TV series based on what HBO presents as a “cult” following.

To those who consider themselves members of the John Lurie cult, it is probably not too surprising that he would express views contrary to those of Bob Ross -- namely, that not everyone can paint no matter how many Bob Ross painting kits they buy, and trees are not necessarily happy either.

On the contrary, the flora that he produces with thin strokes and light daubs of watercolor paint are delicate and beautiful.

Why he needed to decry the work of Bob Ross in the process of painting his own detailed and complex paintings of the natural world is not explained in the 20-minute premiere episode of “Painting With John” that happens to be subtitled “Bob Ross Was Wrong.”

If John Lurie wished to generate conversation about his new show and draw attention to it by attacking Bob Ross in the first episode, then it is a strategy that, except for this TV Blog, will probably fail.

Bob Ross and his philosophy of painting is not exactly a hot-button issue that people are debating these days. Or if they are, I missed it somehow (which should surprise no one).

As for Mr. Lurie and his own painting, the scenes in his new show in which he actually is painting are the best moments in the show. The rest of it consists of Lurie ruminating about aspects of his life such as his childhood and the way his parents seemed to encourage and nurture him and his two siblings in their creativity.

For the record, the judgmental watercolorist does not restrict his judgements solely to Bob Ross. In another part of the show, Lurie passes judgement on people whose laughter he does not trust.

He also makes a sweeping generalization about the relative happiness of people in Thailand, based also on the tone of laughter he apparently overheard while visiting that country.

Suffice it to say that “Painting With John” is not exactly a barrel of laughs either.