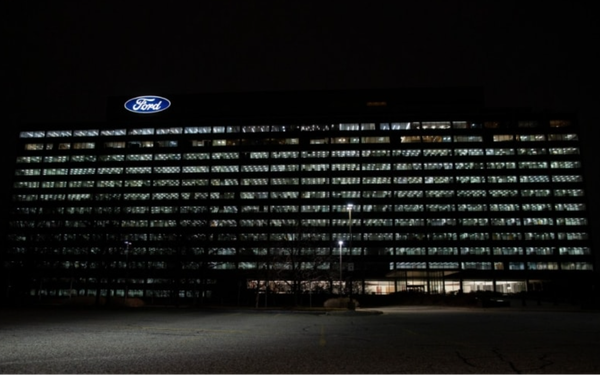 Ford Motor Co. and Atlanta’s Hartsfield-Jackson International Airport are among the businesses  participating Tuesday in a memorial honoring people who lost their lives as a result of the COVID-19 pandemic.

For one hour starting at 5:30 p.m. ET, Ford will illuminate its world headquarters in Dearborn, Michigan, and the historic Michigan Central Station that the company is restoring in Detroit --  with simultaneous building lightings and church bells ringing all over the country.

The memorial was planned by the 2021 Presidential Inaugural Committee and will feature a lighting around the Lincoln Memorial Reflecting Pool in Washington to mark the day of remembrance and unity. Nearly 400,000 people have died during the pandemic in the United States thus far.

Ford is a chair of the committee and contributed up to four million Michigan-made face masks being used by participants in the committee’s National Day of Service on Martin Luther King Day.

Other iconic structures to be lit up include New York City’s Empire State Building and Seattle’s Space Needle.

According to a release from the Biden transition team, among the hundreds more  cities involved will include the president-elect's hometown of Wilmington, Delaware,  Miami, Las Vegas, Philadelphia, Houston, Chicago, and Charleston, South Carolina.