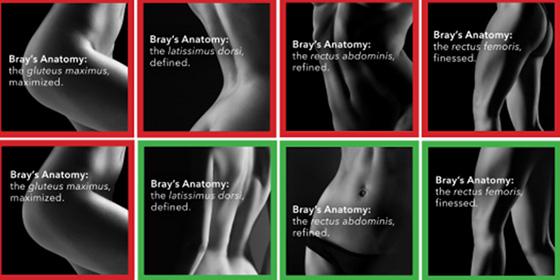 As you can imagine, the pandemic has thrown gyms, studios and other brick and mortar fitness-related businesses into turmoil, given lockdowns over the past 10 months.

The paid campaign, which kicked off Jan. 4, is running primarily on social media, including Instagram and Facebook. Non-paid will run on the client’s own site and YouTube channel.

For the Facebook portion of the campaign, plans didn’t exactly go without a hitch. Turns out, some of the stills the agency wanted to use proved a bit too risqué for the social network, which forbade their use.

The photos in question weren’t that risqué, but rather artfully shot images of finely-sculpted torsos and backs and some side profiles of well-toned derrieres. The accompanying graphic shows some of the images rejected, framed in red and some that were accepted, framed in green.

According to HI cofounder-strategy and account service lead Abby Hirschhorn, it was an FB algorithm that intervened, not an actual human.

Apparently, once the algorithm rules, all humans must obey.

Per Hirschhorn, a former CMO at DDB Worldwide, the FB campaign images were all designed “to be artful and beautiful.” The algorithm determined that the rejected images were “sexually provocative.”

The campaign, she asserts is “distinctive” compared to many in the category with a focus on hyperactive fast-cuts and lots of shouting. And Hirschhorn insists there is “nothing suggestive at all” in the rejected images. The campaign, she adds is all about “selling fitness.”

The campaign also includes video vignettes that weave together some of the arty still photographs. And strangely, the FB algorithm rejected one of those videos even though it contained just images accepted in a static format.

At the end of the day, the agency bit the bullet, made adjustments demanded by FB’s algorithm and delivered the campaign on time, says Hirschhorn.

But she admits to being “disappointed” there isn’t more flexibility in FB’s approval process — like being able to appeal to a human when the algorithm says no.

“They delegate censorship to an algorithm,” Hirschhorn says. And “that’s a disservice” to the platform, as well as clients and consumers.