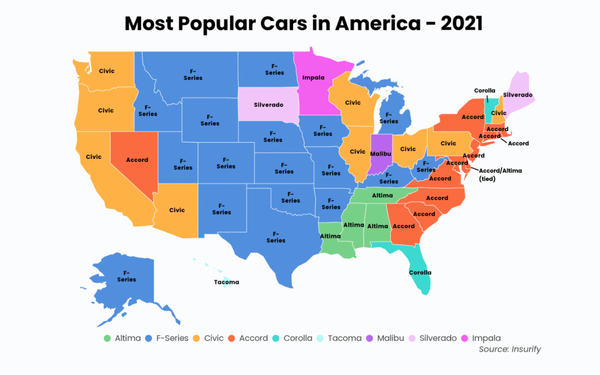 Ford Motor Co.’s F-Series pickup trucks and the Honda Accord are the top two most popular vehicles in the country, per a study by Insurify.

The popularity of pickup trucks was widespread this year, with the vehicle type landing three out of the top 10 spots. The Ford F-Series is the most popular vehicle among car owners in 18 out of 50 states.

Across the nation, many states share car preferences with their neighbors. Hondas tend to rule the coasts — the Honda Civic and Honda Accord are the most popular vehicles in states along the Pacific and Atlantic coasts, respectively. On the other hand, Ford F-Series Pickups have a stronghold throughout middle America, from the north to the south, according to Insurify, an American insurance comparison shopping website.

All 10 of the most popular cars in America share one thing in common: They are among the more affordable vehicles on the market. All of the cars have an MSRP that is below the national average of $37,851 by an average of $12,600.

COVID-19 has strongly informed consumer trends over the past year, including new and used car buying behavior, according to Insurify. The pandemic has shaped how we travel, and with restrictions on and advisories against public transportation use, many Americans opted to get behind the wheel themselves.

According to Apple Maps Mobility Trends Reports, driving patterns have leveled out to typical pre-pandemic rates as of January 2021, while transit use still lags at a 54% decrease from March 2020.

Cars have remained a reliable necessity for many. The country’s return to normal driving patterns, when compared to the reluctance for many to get back on public transit, illustrates the resilience of the automotive market, according to Insurify.

Despite a 15% decline in auto retail sales in 2020, this loss is projected to be less than that of the decline during the 2008 Great Recession (18%). Additionally, car retailers benefited from the demand for individual mobility, with many dealer groups reporting record profits in the third quarter of 2020.

To determine the most popular vehicle in each state, Insurify examined its database of over 2.9 million car insurance applications. Applicants must disclose their driving history and information about the make and model of their vehicle when applying for car insurance, in addition to their state of residence.

The vehicles with the highest number of drivers in each state were named the most popular car for their respective states. The models were then ranked by the number of states in which that vehicle holds the number-one spot. To round out the list to include the top 10 vehicles in the United States, the vehicle in the tenth spot is the second-most popular vehicle across the nation (but does not hold the number one spot in a particular state).