2020 Was Banner Year For Mobile App Downloads, Too 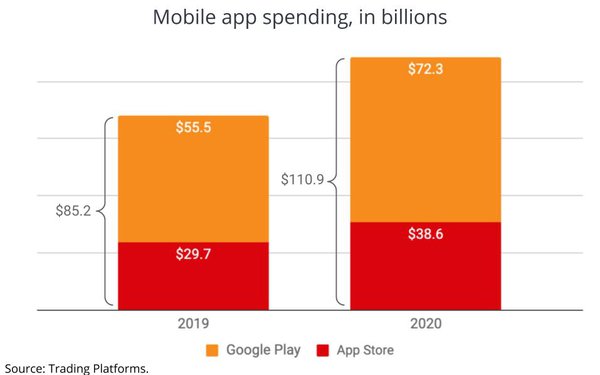 It's no surprise by now that 2020 was a banner year for most digital media, but it was a boom for the mobile apps marketplace, which surpassed $100 billion for the first time, according to estimates released this week by Trading Platforms.

In fact, total spending on apps from the two major app stores -- Apple's and Google Play -- surged more than 30% from 2019, about the same rate of growth as each operating system individually.

Significantly, the pandemic might have indoctrinated new users in a way that wouldn't have happened organically, with first-time downloads reaching 143 billion in 2020, a 24% increase over 2019.

The data also reinforced the notion that mobile devices aren't just a function of out-of-home mobility, but appear to have increased utility for people working, studying or otherwise domesticating at home. That's a trend likely to continue post-pandemic, especially as mobile device and connectivity expand with 5G, making individuals' mobile devices their own personal data and media routers.