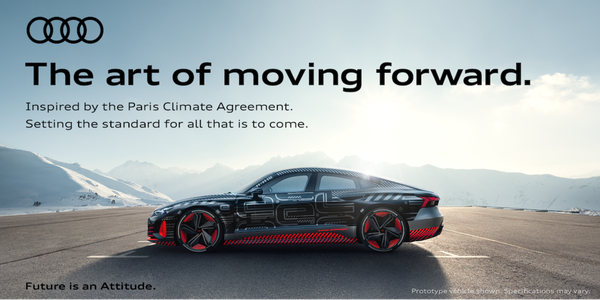 Audi of American had a positive reaction to the United States’ return to the terms of the Paris Climate Agreement.

President Joe Biden issued an executive order to do so on his first day in office. He also canceled the Keystone XL Pipeline and ordered federal agencies to begin the process of reinstating environmental regulations reversed under the Trump administration.

Audi was among the first automotive manufacturers to publicly support and align its actions toward the goals of the agreement, says Tara Rush, Audi of America CMO.

"This includes our goals of achieving net carbon neutrality by 2050 and expanding our electric vehicle portfolio here in the U.S. to 30% percent by 2025," Rush tells Marketing Daily. "All of us at Audi are committed to creating a thrilling new era for electric mobility."

The automaker took to social media to post its reaction to President Biden’s quick action on Wednesday.

“We’re celebrating that the United States is once again cementing its commitment in the fight against climate change,” per a statement from the automaker. “For us, this is particularly exciting as we are set to introduce our next all-electric vehicle in our portfolio -- the Audi e-tron GT -- in February.”

Former President Donald Trump pulled the U.S. out of the agreement in 2017.

Tesla CEO Elon Musk tweeted at the time that Trump's decision would prompt him to resign from two presidential advisory panels on which he serves. "Climate change is real," wrote Musk. "Leaving Paris is not good for America or the world."

Automakers began to pull back from Trump soon after the 2020 election. General Motors in November abruptly announced it would no longer back the Trump administration’s ongoing effort to bar California from setting its own vehicle emissions rules.

BMW joined other automakers in August to advance the Science Based Target initiative. Science-based targets allow companies to specify how much and how quickly they need to reduce their greenhouse gas emissions, according to the We Mean Business coalition, a global nonprofit coalition working with businesses to take action on climate change.

The German manufacturer joined other leading automakers including PSA Group, Groupe Renault and Mercedes-Benz, which all have approved science-based targets, while Toyota and Nissan have committed to set targets.

Ford Motor Co., Honda, Volkswagen and BMW struck a voluntary agreement in July 2019 with California on reducing vehicle emissions through the 2026 model years that would allow them to meet a single nationwide standard. 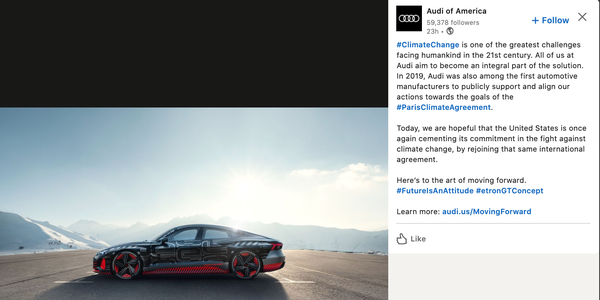