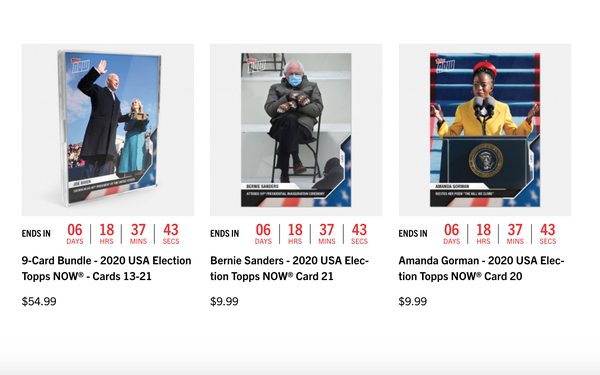 The cards will be available for one week only, starting at $9.99 and are exclusively sold on Topps.com as part of the Topps NOW collection, which captures legendary moments in sports, entertainment and pop culture.

A Topps baseball card featuring coronavirus expert Dr. Anthony Fauci throwing out a first pitch became the bestselling card in the history of ToppsNow, the company’s collection of limited-edition cards. More than 51,500 Faucis were sold when the card hit the site in July, the company said.

The Bernie Sanders card might give the Fauci card a run for its money.

The image of Sanders sitting in his folding chair dressed rather casually compared to most attendees has inspired countless memes and social media posts today, with quips such as “Bernie, dressed like the inauguration is on his to-do list today but ain’t his whole day” and “This could’ve been an email.”

Photoshop enthusiasts have gone wild, inserting Bernie's photo into images of such events as the Capitol insurgence and George Washington’s crossing the Delaware River, and in scenes of TV shows and movies like  “Schitt’s Creek,” “Golden Girls,” “Friends” and “Rain Man.”

Some brands have also gotten in on the action, creating social media posts featuring the image -- including Shopify, Jameson Whiskey and Etsy.