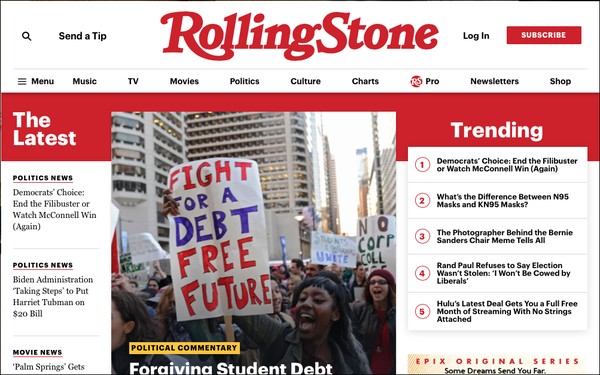 Rolling Stone magazine began offering bloggers a way to write for its website if they're willing to pay a $2,000 fee. The music and culture title, published by Penske Media Corp., solicited potential contributors to its new "Culture Council" in an emailed invitation, the Guardian reported.

Before they can start publishing, contributors must fill out an online application that asks for personal and professional information, including job title, company name and yearly business revenue. Rolling Stone's site also asks for links to LinkedIn profiles and Twitter handles, presumably to help evaluate the applicant's social media following.
Contributors who survive the vetting gauntlet are asked to pay an up-front fee of $500, followed by a yearly charge of $1,500, according to emails cited by the Guardian. In return, Rolling Stone provides "a dedicated editorial team to guide you through the writing and publishing process," according to its website.
“Being published in one of the best-known entertainment media outlets in the world sets you apart as a visionary, leader and bold voice in your industry,” the site says. To quality as a "thought leader," contributors must earn at least $50,000 a year from speaking fees, among other criteria.
PMC didn't return a request for comment submitted through its corporate website.
A spokesperson for the company cited by the Guardian said Rolling Stone doesn't allow paid content to run as editorial, and any such content is clearly labelled. The magazine's partner, the Community Co., vets first-person articles, which are labeled with a banner describing the Culture Council as “an invitation-only network of industry professionals." Membership is “fee-based,” a separate disclosure indicates.
Rolling Stone's effort to start a blogger network of paying contributors is a sign the magazine is seeking ways to parlay the value of its brand in other monetization efforts. The storied magazine in September launched RS Shop to sell merchandise inspired by music and pop culture.
PMC bought a controlling interest in Rolling Stone from founder Jann Wenner in 2017 and purchased the remaining stake 13 months later. PMC last month announced plans to combine the business functions of Rolling Stone, Billboard and Vibe, bringing together their sales and marketing teams.