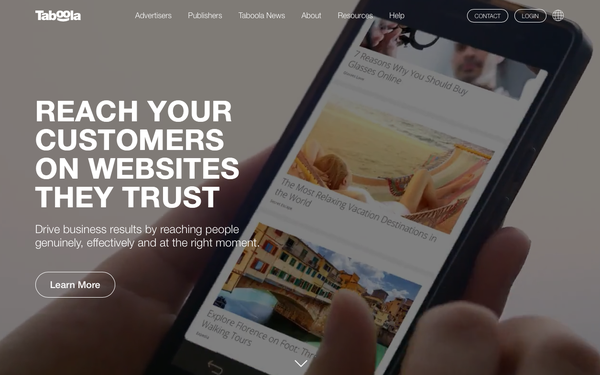 Taboola plans to go public through a type of deal that has become more common in the past year. The content-recommendation company is seeking a $2.6 billion valuation in a merger with a special purpose acquisition company (SPAC) whose shares will start trading in the second quarter.

Proceeds from the deal will be used to expand Taboola's platform, which the company touts as a key money-making tool for publishers faced with growing competition from digital advertising giants, such as Alphabet Inc.'s Google, Facebook Inc. and Amazon.com Inc. Taboola estimates that ad spending on the open web outside the "walled gardens" of the tech giants hit $64 billion last year, according to an investor presentation.
In a SPAC deal, businesses set up a publicly traded shell company that raises money from investors to buy an interest in a private company, effectively taking it public. SPAC deals have fewer regulatory hurdles than initial public offerings (IPOs), making them quicker to complete.
Taboola seeks to raise $545 million for its SPAC, which is called ION Acquisition Corp. 1 Ltd. The amount includes $285 million of private investment in public equity (PIPE) financing from investors such as Fidelity Management & Research Co. and funds managed by BlackRock Inc.
"Over the next 10 years, I see Taboola growing to power recommendations for anything, such as e-commerce, games, applications, and I see those recommendations everywhere, on every device," Adam Singolda, founder- CEO at Taboola, stated.
Taboola's planned SPAC deal comes four months after a proposed merger with rival Outbrain Inc. fell through amid disagreements over valuations. In October 2019, Taboola had agreed to buy Outbrain for $250 million in cash and 30% stock in the merged company.
Taboola's adjusted earnings more than tripled to an estimated $106 million in 2020, as revenue expanded 28% to $379 million. That revenue consisted of $1.19 billion in gross revenue minus traffic acquisition costs paid to publishers of $811 million.
Gannett Corp., Axel Springer SE and Bloomberg LP are among the 9,000 publishers that carry Taboola's feed of sponsored content and news, netting more than $2 billion in the past few years.
Group Nine Media Inc., the digital publisher whose brands include Thrillist, NowThis and PopSugar, this month went public through a SPAC deal.