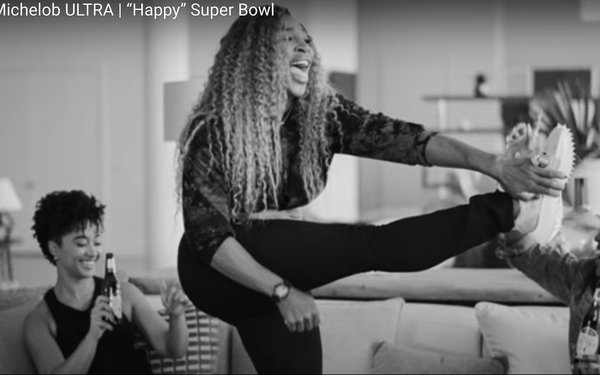 While Anheuser-Busch made news on Monday when it formally announced its Budweiser brand beer will be a no-show for the Super Bowl this year for the first time in 37 years, its most popular siblings will be flying the flag at the game.

Monday afternoon, high-flying Michelob Ultra, which handily outsells Budweiser, announced its sports-star-filled, one-minute Super Bowl commercial in which famous athletes are partying while a voiceover asks if winning makes us happy, or if being happy makes us winners.

In the commercial, a quick-cut series of videos and photographs, Serena Williams (shown above), Anthony Davis, Peyton Manning, Brooks Koepka, Jimmy Butler and Alex Morgan don’t attempt an answer, but they do make it plenty clear they’re happy.

“Enjoying the moments along the journey is as important as the journey itself,” said Ricardo Marques, vice president of marketing for Michelob Ultra, in a press release.

In the last few years, Ultra has cultivated a following with athletes and fitness followers that lets this ad, from Wieden + Kennedy New York, play to this segment while also appealing to a wider sports crowd watching the football game. The video is already on YouTube.

Though Budweiser is out of the game, Anheuser Busch InBev will have just as many ads as it did last year.

The Michelob Ultra ad will be joined on Super Bowl Sunday by another commercial for Michelob Ultra Organic Seltzer, officially launched Monday and touted to be the first nationally distributed USDA-certified hard seltzer on the market. (Vizzy hard seltzer from Molson Coors is the only major brand that features antioxidant Vitamin C.) Bud Light and Bud Light Seltzer also get Super Bowl exposure.

The brand is also the poster child for a trend in beer (and other products) toward class versus mass brands. As Anheuser-Busch is learning and encouraging, a sizable segment of the population will pay more for higher-priced beverages as a kind of status decision.

In a current ad deriding that conceit a bit, a customer chooses to buy a case of Ultra from the cooler of an unfancy neighborhood store. At the counter, the clerk casually mentions, “You know Miller Lite has just one more calorie, right? The customer returns the Ultra and comes back with the more mainstream Lite.

But that vignette is not reality. Michelob Ultra is the fastest-growing beer in the business and now ranks only behind Bud Light for top-of-the-heap honors, according to IRI data.