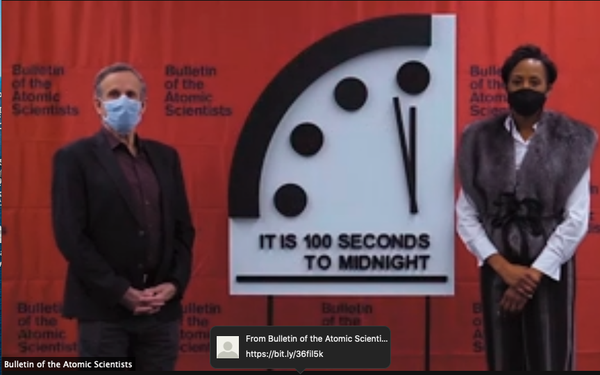 The Bulletin of the Atomic Scientists this morning announced it is keeping its “Doomsday Clock” at 100 seconds to midnight -- the closest it's ever been set to the end of the world as we know it -- citing what are at best mixed signals for several key existential threats to humanity, including nuclear war, climate change, and beginning last year, a global pandemic. And while it didn’t add a fourth, it probably should: media. Explicitly, the kind that can accelerate the spread of disinformation that exacerbates all other existential threats.

While the Bulletin’s President and CEO Rachel Bronson said that kind of media is factored in its board’s doomsday calculations, they are listed as a “threat multiplier,” with the fundamental threats being nuclear war, climate change and biological threats like the COVID-19 pandemic.

But based on the Q&A that followed today’s briefing, I recommend they add media as one of the doomsday threats, because recent history has proven it can be “weaponized” just like nuclear, biological or chemical weapons for the purposes of mass destruction.

“I wonder if this is something you are considering when you look holistically at our threats as a species,” asked Molly McKew, the lead author of Great Power, a digital publication that describes itself as covering “unconventional stories about unconventional wars.”

I’ll admit, I never heard of Great Power, or McKew before, but I think she asked the most salient question of the Bulletin’s board during the Q&A, concluding by asking, how we can “determine what are the threats against us, if we can’t evaluate and see the truth in the same way anymore.”

McKew was alluding to the weaponization of digital platforms -- especially social media -- to spread disinformation for the kind of political gain that we saw over the past several years in the U.S., but she said this is not a U.S. problem alone, because other big nations such as Russia and China have been using it to disinform and amplify conspiracies across the world and that it has been contributing to “the overall erosion of fact-based scientific truth.”

It was quite a question to lob at the end of a briefing of leading scientists, academics and world leaders wrestling with the setting of a doomsday clock intended to inform humanity about the current risks it faces from some pretty obvious existential threats, and I’m surprised that media hasn’t become an equally obvious one in the minds of the Bulletin’s board?

While the weaponization of media isn’t new -- nations, including the U.S., but especially Russia have been aggressively waging hybrid warfare via disinformation campaigns since the end of World War II -- but something accelerated with the power and instantaneous ubiquity of the World Wide Web and especially social media platforms capable of reaching -- and importantly, segmenting -- billions of people who often aren’t equipped to vet the facts they are presented with.

The board’s climate change authorities on climate change, biological disease and nuclear weapons all acknowledged the role media plays in magnifying those threats, something I learned while working with climate scientists on a project organized by late University of Massachusetts professor David Lustick that examined the role of media in educating and informing the public about climate change. And I’ve been thinking about it ever since.

Ironically, it was stumbling upon The Bulletin of the Atomic Scientists in my college library while studying journalism in the 1980s that helped influence me to cover media, because it is an example of utilizing media to help combat -- not amplify -- existential threats. And its Doomsday Clock is just a visual media device to help people get their minds around it.

Of course, I have my one beliefs about the role of media, and thing that everything human beings do is media, and therefore, media is everything human -- both bad and good. So I hope the Bulletin’s board takes McKew’s question to heart and considers the explicit role media disinformation plays -- in and of itself -- as one of our greatest existential threats.