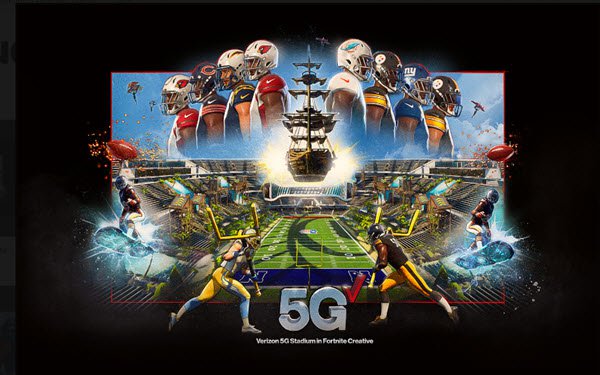 Verizon is pulling out the stops to drive home the power of 5G during its fourth consecutive appearance at the Super Bowl.

In addition to a commercial during the game on Feb. 7 (no details on that ad yet), Verizon has invested $80 million on permanent 5G deployments in Tampa’s Raymond James Stadium and surrounding areas.

The Verizon 5G SuperStadium in the NFL mobile app will allow fans with an iPhone 12 engage with seven different camera angles if they’re in the stadium and five angles if watching from home, as well as project AR overlays of NFL’s Next Gen Stats for players.

Verizon Media’s Watch Together, a free co-viewing experience in the Yahoo Sports mobile app, will let fans co-watch Super Bowl LV with friends and family on their phones.

SuperStadium and Watch Together are powered by the Verizon Media platform’s streaming technology.

“Reimagining live events is one of the best use cases for the power of 5G,” said Verizon CMO Diego Scotti.

The company is also launching what it describes as the largest activation ever built in Fortnite Creative: a virtual Verizon 5G Stadium.

Built by BeyondCreative in partnership with Epic Games, the 5G Stadium will let gamers interact with NFL players and pro gamers in novel ways during four football-inspired games, according to the company.

On Feb. 2 and Feb. 5, fans can tune in to Twitch and @Verizon on Twitter at 7 pm ET to watch NFL players including Tua Tagovailoa, Kyler Murray, Tarik Cohen, Saquon Barkley, Joey Bosa, Ryan Shazier, and pro gamers Myth and KittyPlays, compete games created for the Fortnite Creative stadium. The two livestreams will be hosted by late-night hosts, podcasters and authors Desus Nice and The Kid Mero.

In addition, the company is sponsoring a post-game virtual event, at 11 pm ET, called “The Big Concert for Small Business.”

Verizon says it will donate $10 million to the Local Initiatives Support Corporation (LISC), a nonprofit that supports community development initiatives.

Verizon’s $80-million investment in permanent 5G network enhancements included 70 miles of high-speed fiber, an upgraded distributed antenna system, and 281 small-cell antennas that will provide coverage in downtown Tampa, Ybor City, and the Tampa Riverwalk, as well as in and around the stadium.

Verizon reports that over the last year, it has worked with teams and other venues to use 5G Ultra Wideband and 5G Edge for next-gen safety, access and crowd management solutions that will help enable a return to live events.