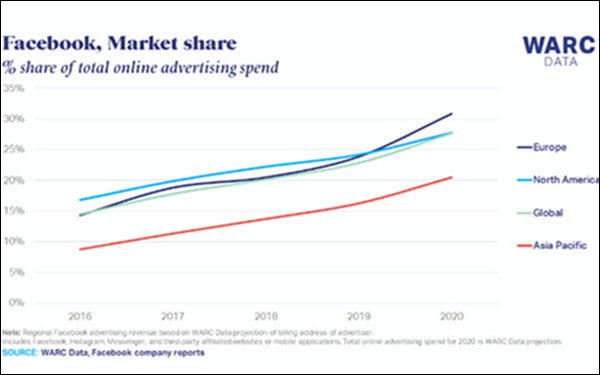 Facebook Inc.’s continuing advertising growth during a challenging time for the market as a whole has driven the company’s share of global online advertising to 27.7%, according to a WARC Data analysis of the company's latest reports.

The company’s share of North American online ad spend is virtually the same, per these estimates, which include ad revenue for Facebook, Instagram Messenger, and third-party affiliated websites or mobile apps.

In reporting its Q4 and year-end results, Facebook Inc. attributed some of Facebook’s growth to the accelerated growth of ecommerce during the pandemic, which caused brands to experiment with new offerings like Facebook Shops.

And despite its dire warnings of the impacts that Apple’s coming privacy options on iOS 14 will have on ad targeting — and its possible antitrust suit against Apple as a result — Facebook Inc. suggested that its 31% Q4 growth is likely to continue or accelerate in this year’s first half.

Instagram may be positioned for even stronger growth. In WARC research with more than 1,000 marketers, included in its Global Marketing Index report, 52% said they expect to increase their spend on Instagram this year, versus 39% expecting to increase their Facebook spend.