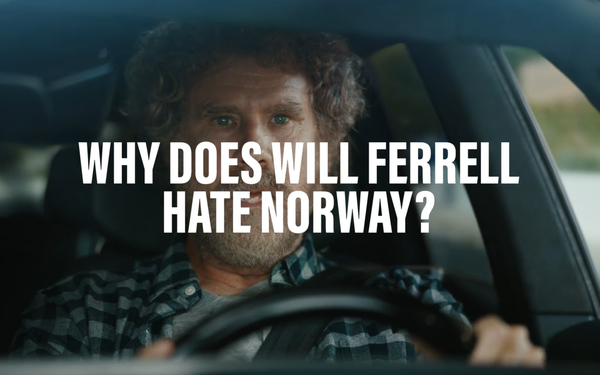 General Motors is milking its Super Bowl buy for all it can, today releasing three 15-second teaser spots featuring actor Will Ferrell.

The actor will appear in the 60-second corporate-level spot previously announced last week by the automaker, which was created by Commonwealth//McCann Detroit.

"With all the Olafs, skiing and year-round sweater weather, why is actor and EV enthusiast Will Ferrell so obsessed with Norway?" the automaker asks in a statement issued with the teaser spots.

"The answer to the question posed in these big game teasers is coming soon, but it has something to do with Ferrell -- and General Motors -- wanting Everybody In on electric vehicles. Perhaps someone should tell him GM has 30 EV models coming by 2025."

The automaker's other spot will feature GM's luxury brand, Cadillac. That ad, from Leo Burnett Detroit, also features a celebrity, but the automaker is keeping his identity and other details under wraps, perhaps with the hope of garnering still more press coverage.

I miss the old days when brands rarely revealed any details about their Super Bowl spots before the game. The buildup was tremendous, and the ads seemed larger than life when viewed for the first time in the moment when they first ran. Now, by the time the Super Bowl rolls around, it's pretty ho-hum.

The automaker provided a screenshot of the Cadillac spot that shows the Lyriq in a driveway next to a topiary dinosaur similar to the ones created by the title character played by Johnny Depp in Tim Burton’s “Edward Scissorhands” 1990 movie.

Still to come: Stellantis, which includes the Jeep, Chrysler and Dodge brands, is also promising a Super Bowl spot or two this week, although the company might actually embargo the info for the game. CMO Olivier Francois has remained kind of old-school in that regard, not looking for a bunch of extra stories beforehand, but generating much bigger buzz with the spot itself (think Jeep/Bill Murray/"Groundhog Day" -- one of last year's most-talked-about ads.)

Toyota also has yet to tease its creative, which is most likely from lead agency Saatchi & Saatchi.

Ford Motor Co., not one to sit on the sidelines, also reportedly has something brewing in conjunction to the Super Bowl, perhaps on a regional level.