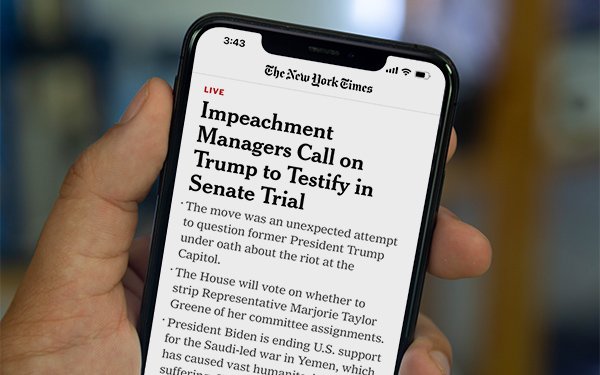 added 2.3 million digital-only subscriptions in 2020, bringing its total sub base for both print and digital products to 7.5 million.

The spike reflects avid interest by readers in news during the tumultuous year, including stories covering the pandemic and the election, the Times reports in a story. And it positions the Times to pull in 10 million subscriptions by 2025.

“In 2020, we reached two key milestones, both of which we expect to be enduring: Digital revenue overtook print for the first time, and digital subscription revenue, long our fastest-growing revenue stream, is also now our largest,” states Meredith Kopit Levien, CEO for the company.

Digital subscription revenue totaled $167 million in the fourth quarter, a 37% increase over the same period in 2019.

The Times projects a 15% increase in subscription revenue in this quarter YoY, and a 35% to 40% rise in digital sub revenue.

But ad revenue is forecast to fall by a little less than 20%, the report adds.

In another development, the newspaper is increasing dividend payments to 7 cents per share, up from 6 cents. This will total $46.8 million a year, which will benefit the Ochs-Sulzberger family that controls the paper, the story states.