Why A Post-IDFA World Will Be Good, Not Bad For Advertising 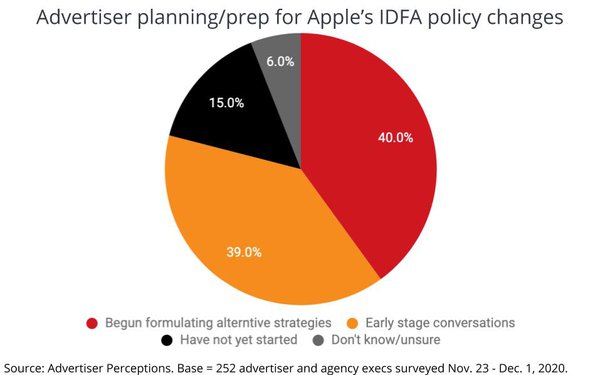 While most of the focus has been on the burgeoning platform war between Facebook and Apple, most advertisers still have no concrete plans for adjusting to life after IDFA, Apple's long-standing identifier for advertisers to target iOS users.

Facebook, of course, has sought to mobilize the impact on small and medium-sized businesses to lobby against Apple's changes, arguing it will materially impact the return on their ad spending on Facebook by making targeting iOS users less effective. Whether that argument holds water and/or what Facebook's true motives in making the case to small advertisers actually is, the impact on big advertisers isn't all that clear.

Among those who have begun developing alternative strategies, two-thirds plan to either kill or reduce their budgets explicitly targeting iOS users, though 12% actually plan to boost their iOS budges, presumably to offset the greater inefficiency in targeting those users.

The most important part of the big advertiser response to Apple's moves is it implies that they don't see the changes as the kind of existential threat Facebook has been suggesting in its advertising and lobbying campaign attacking Apple.

“Programmatic advertisers will shift some of their ad dollars to places where they still have an ability to target and measure their audiences as they’ve done in the past,” Advertiser Perceptions Vice President-Business Intelligence Lauren Fisher notes, adding, “That could mean connected TV (CTV), Android for now, and other parts of the web.”

In other words, advertisers have other options and are not dependent on targeting the identities of iOS users the way Facebook has implied.

Personally, I think his is a healthier way of thinking about changes in identity-targeting protocols, because Apple will not be alone. Google already is advancing the deprecation of third-party cookies as web browser identifiers, and a variety of platform, self-regulation and governmental regulations will continue to push identity-targeting in the other direction, because Big Data, ad tech, and -- how shall I say this... less-than-transparent opt-in data gathering policies -- have become exposed and well-known by a broader cross-section of society.

We can see it in new codes and ethics policies being developed by industry coalitions, and even individual companies (like GroupM), and I don't expect that genie to go back in the bottle anytime soon.

The biggest beneficiary of these changes will be good, old-fashioned methods of targeting -- especially contextual ones that utilize the media and content that attracts consumers -- as a proxy for their identities. I can't think of any approach healthier than that for all concerned, because:

a) Contextual targeting doesn't rely on exposing people's personal identities of their behaviors (other than the one indicating what content they are interested in).

b) It will enhance the digital media and advertising industry's goodwill in society, and especially among regulators.

c) It will -- and this is my favorite reason -- recouple the value of media content and environments with the consumers that attracted them to the places an advertiser's messages run adjacent to. You know, the way advertising used to work.