CBS All Access Glitch Hits Just Ahead Of Super Bowl 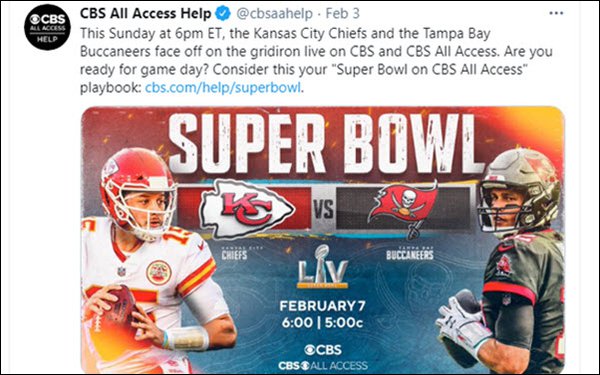 Some Super Bowl fans had a few moments of panic due to a glitch in ViacomCBS’s CBS All Access streaming service.

Problems with CBS All Access peaked as the game began at about 6:30 pm ET (hitting about 25,000), but began to taper off within 10 minutes, according to DownDetector data cited by Variety, which reports that Roku and desktop users were among those who experienced technical difficulties with the streaming app.

Those already watching CBS’s live stream were not affected, and most who were affected were able to access the stream after rebooting. The technical issue was resolved soon after the game began.

CBS All Access did not respond last evening to press inquiries about the glitch.

“The incident represents a weak spot for streaming services vying to win rights to air big games from major sports leagues” and looking to upend the cable bundle, points out Axios.

“Streaming TV technology still isn't as reliable as traditional broadcast or cable during highly trafficked events,” and many analysts believe that the cable TV model will continue to struggle on until a streaming company manages to secure rights to a major sports franchise.