Kenan Wins, But His New Sitcom Is One Big Cliche 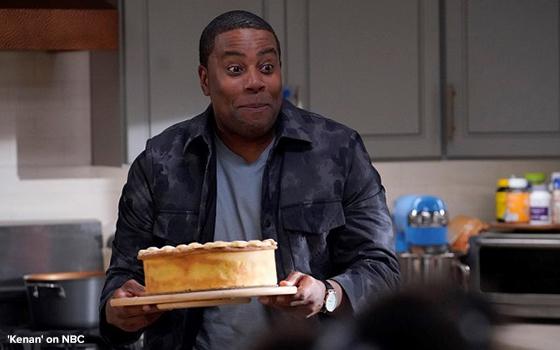 One thing you can say about Kenan Thompson is: He is a company man.

The company is NBC, where Thompson has been a member of the “Saturday Night Live” cast since 2003 -- which makes him the longest-running cast member in this show's long and hallowed history.

And now, finally, the network has seen fit to award this loyal employee with his own prime-time situation comedy under the supervision of Lorne Michaels, who is one of the show's executive producers.

NBC provided only the first episode of “Kenan” for preview, so no determination could be made about the series’ merits past the first half-hour, which plays like a typical sitcom pilot.

In the show, we learn the particulars about the life of this fictional character named Kenan who is played by the real-life Kenan Thompson.

The show has this fictional Kenan living in Atlanta in a household that includes his two young daughters and his father-in-law, played by Don Johnson. The sitcom Kenan is a famous local TV personality who hosts a morning show on one of Atlanta's local TV stations.

He also happens to be a widower, whose wife, we learn in the show, died of unspecified causes about a year ago. He loved her and misses her very much. Understandably, he struggles privately to cope with her death.

But in the public forum of his TV show, he is an ebullient, outgoing personality who is evidently popular. But at times, his unresolved grief interferes with his ability to play the good-humored clown every morning on TV.

This situation forms the basis for the series’ premiere of “Kenan,” if not for the entire series itself (although that remains to be seen).

So how was the premiere episode? It was pleasant enough, but elicited no real laughs -- at least around here.

With its family-oriented scenario -- single dad with two daughters, plus an older father-in-law on-hand as a would-be comic foil for the beleaguered man of the house -- “Kenan” would appear to possess absolutely nothing that we have not seen before in a hundred TV sitcoms.

And on the subject of that father-in-law, the casting of Don Johnson in a comic role is a head-scratcher.

Surely, there must be any number of comedic actors of a certain age with broad comedy experience who could have really done well in a role like this one. Or maybe there is only one -- Ted Danson -- and he was busy on that other NBC sitcom, “Mr. Mayor.”

As for Kenan himself, he is a very winning performer and by all appearances, well-qualified to play the lead role in a network sitcom like this one. And he does give it his all, such as in the scene pictured above in which he cannot wait to tear into a delicious cake.

Thompson is apparently hedging his bets because he is reportedly remaining on “SNL” while commuting all the way to California to film this new sitcom. Although “SNL” is a nighttime show, this seems to be a case of “keeping one’s day job,” just in case the new one doesn't work out.