In New Year, COVID Is Less Prominent In Prime Time 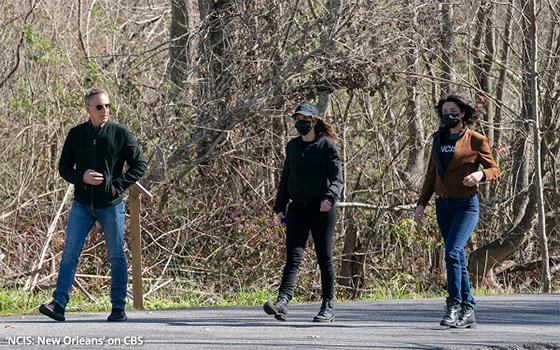 As TV goes, so goes the nation.

The above sentence -- which is borrowed from political lore (“As Maine goes, so goes the nation”) -- is a cheeky way of trying to link the subject of this TV Blog to general trends where the topic of COVID-19 is concerned.

It is now February 16, approximately six weeks into the new year, and the realization has set in that the TV Blog hardly ever deals with the subject of COVID anymore. The reason: In most cases, our scripted dramas and comedies are not dealing with it either.

This contrasts sharply with the way COVID found its way into so many of the TV blogs posted here in 2020. It was the subject of 50 of them, including 16 in which the all-caps word “COVID” appeared in the blogs’ headlines.

The word did appear in a headline in 2021, on January 11, in a TV Blog about how the season premiere of the Fox medical drama “The Resident” dealt with COVID.

In brief, the blog reported on how this contemporary hospital show dealt with the pandemic in that episode, and then had its characters leapfrog into a future time that was apparently COVID-free.

The result is that now, as far as this doctor show is concerned, COVID is a thing of the past. Or more to the point, its characters will not have to conceal their faces behind masks for the rest of the season.

One reason for the many COVID blogs last year was the appearance last fall of a raft of new and returning series whose production had been delayed in the first months of the pandemic and into the summer.

Thus, the blogs dealt with how these returning shows -- particularly the ones that take place in the present day -- were coping with COVID.

However, here in the midseason (otherwise known as winter), there are fewer new and returning shows to write about than there were then. And for the most part (“The Resident” being an exception), COVID has not exactly been center stage in any of them.

Among the new shows that have premiered so far this year in which the coronavirus pandemic plays no part include comedies (NBC’s “Kenan” and “Mr. Mayor,” Fox’s “Call Me Kat” and ABC’s “Call Your Mother”) and dramas (CW’s “Walker,” “Coyote” on CBS All Access and “The Equalizer” on CBS).

It could be that the makers of TV’s scripted comedies and dramas are ambivalent about COVID -- perhaps not unlike the way many people in the real world are feeling about the pandemic these days as the restrictions and lifestyle changes it imposed drag on to the one-year mark in March.

In the above photo from a midseason episode of “NCIS: New Orleans” on CBS, for example, two of the characters are wearing masks, while one -- Special Agent Dwayne Pride (Scott Bakula) -- is not. Let the record show, however, that the three are at least socially distant from each other.

When I came upon this photo on the CBS publicity website, I immediately felt that it looked like my own New York neighborhood in which most people wear masks when walking around outside, but occasionally, some -- like Scott Bakula above -- do not.

In fact, throughout prime time right now, characters wearing COVID-related masks in both comedies and dramas are increasingly scarce.

Even most hospital dramas have done away with them, although one exception is “Grey’s Anatomy,” where the doctors were seen recently talking to patients through clear plastic face coverings through which the actors’ complete faces were visible.

That series is so intent on positioning itself as reflective of life in the contemporary real world that it is being promoted with the slogan “ ‘The Conners’: Socially distant since always.”

But for the most part, TV’s scripted shows are looking like they're done with COVID -- just like the rest of us.