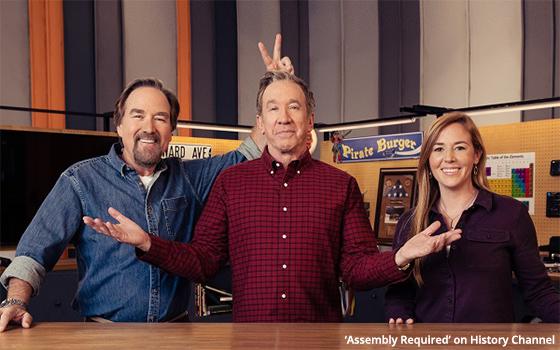 If there is one single overriding narrative that forms the basis for the history of the United States, then it is one that can be defined with a series of I-words -- among them, ingenuity, invention, innovation and investment.

And they all flourished -- and continue to flourish -- in an environment dedicated to individuality and independence. How about that? Two more I-words!

All of these I-words are mentioned here as a way of introducing a new reality-competition show in which American ingenuity and improvisation are celebrated.

The show is called “Assembly Required” and it is co-hosted by Tim Allen and Richard Karn (pictured above), who co-starred as the co-hosts of a fictional DIY show in the old ABC sitcom “Home Improvement.”

On their new show, Pamela Anderson is nowhere to be seen, but the two are joined by DIY blogger April Wilkinson (above right).

In the show, the hard work of constructing the show’s home-engineered projects is undertaken remotely -- in the home workshops of each episode’s contestants, while Allen and company watch on monitors from what seems to be Allen’s own private garage and workshop.

As many people know -- especially those who have seen Allen cavort with Jay Leno on “Jay Leno’s Garage” on CNBC -- Allen collects and restores vintage cars (although not nearly as many as Leno).

In the series premiere of “Assembly Required” that the TV Blog previewed this week, the contestants were three men from Bluffton, South Carolina, Phoenix, Arizona, and Billings, Montana. All three were skilled in metalworking and woodworking, and other shop techniques.

On the one-hour show, there were two competitions -- the first of which served as an elimination round that left two finalists to compete in the second project, which was a lot more complicated.

In the first one, the men were challenged to build fire extinguishers from an odd assortment of parts that were shipped to their homes.

In the second one, the two finalists were tasked to build elaborate leaf blowers that doubled as flame-throwers. They were given five days to complete this final project.

The results that sprang from this offbeat challenge have to be seen to be believed. One was fashioned like a super-bazooka whose design and decorations were inspired by a World War II fighter plane.

The other one was styled like a hand-held fire-breathing dragon made of custom-cut, hand-hammered metal parts -- complete with a dragon’s head and tail.

Both were great, but in the end, the winner was decided based on a much more practical consideration -- namely, which one worked better.

With the country mired in a pandemic characterized, at least in part, by snafus of all sorts when it comes to distributing vaccines and the hardware and accessories that are needed to administer them, this show comes along at just the right time.

Its message seems to be: Give the job to any number of smart, skilled Americans, and it will get done -- and often better than you expect.