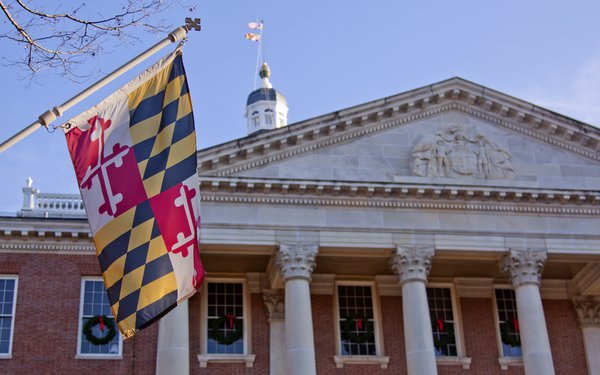 That's according to the Chamber of Commerce and other business groups, including the Silicon Valley lobbying organization Internet Association -- which challenged the law in court on Thursday.

The groups argue that the new tax stems from a “deeply flawed” premise that taxing large tech companies will combat the spread of “dangerous misinformation” and hate speech.

“The background leading to the Act’s passage is undeniable: Maryland lawmakers disapprove of large digital advertising companies and intended to penalize them,” the groups write.

The new Maryland law, enacted this week over Governor Larry Hogan's veto, imposes taxes on companies that have more than $100 million in digital ad revenue. Rates vary 2.5% to 10% of revenue attributable to Maryland, with the percentage tied to global revenue.

Romer opined in the piece that taxing large tech companies would force them to change their business models, which would, in his view, result in higher quality online content.

“The dominant digital platform companies, including Facebook and Google ... have created a haven for dangerous misinformation and hate speech that has undermined trust in democratic institutions,” Romer wrote in the New York Times.

“Instead of banning the current business model -- in which platform companies harvest user information to sell targeted digital ads -- new legislation could establish a tax that would encourage platform companies to shift toward a healthier, more traditional model,” he added.

The business groups say in their lawsuit that this approach will backfire.

“Taxing digital advertising revenue will have the opposite of the Act’s intended effect, reducing resources to support the creation and availability of high-quality ad-supported content, leaving the online field overrun by low-quality 'junk' content,” the Chamber of Commerce, Internet Association, NetChoice and Computer & Communications Industry Association allege in a complaint filed in U.S. District Court in Maryland.

“Simply put, the Act will harm Marylanders and small businesses and reduce the overall quality of internet content -- all while doing nothing to stave off the dissemination of misinformation and hate speech.”

The groups argue that the law is invalid for several reasons, including that the federal Internet Tax Freedom Act -- which overrides state laws -- bans taxes that discriminate against online commerce.

The organizations also say the law is unconstitutional because it assesses a tax rate based on activity that occurs outside the state. That structure violates a provision in the constitution that prohibits one state from attempting to regulate activity occurring in other states, according to the business groups.

“By imposing progressively greater liability on companies for the revenue they earn outside of Maryland, the Act regulates, punishes, and burdens extraterritorial conduct and the earning of revenues that are not fairly attributable to economic activity in Maryland,” the lawsuit alleges.

The organizations are asking a federal judge to declare the tax invalid and prohibit the state from enforcing it.