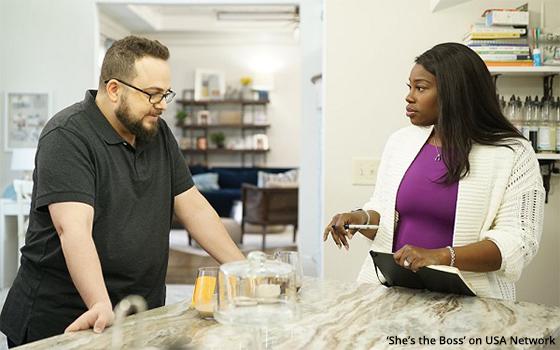 When I first encountered a press release for this new USA Network show called “She’s the Boss” in my email inbox recently, I assumed wrongly that it must be a new version of the old Tony Danza sitcom “Who’s the Boss?” (1984-92, ABC).

That would not have been a bad idea, either. But alas, it was not to be. Instead, “She’s the Boss” is another reality TV show in which an extroverted central character is coached to exaggerate his or her already overbearing behavior while everyone else in his or her orbit rolls their eyes or shakes their heads in feigned understanding and affection at their tormentor’s antics.

Most of the premiere episode of the half-hour “She’s the Boss” sets the tone, presumably, for the show. The boss here is Nicole Walters (above photo, right), described as a “jet-setting entrepreneur who runs a multi-million dollar marketing empire.”

She lives in the Atlanta area in a very nice home (by the looks of it) with her husband, Josh (photo, left), a “stay-at-home lawyer,” according to the show’s publicity materials; and two of their three adopted daughters (a third daughter is apparently grown up and living elsewhere).

An additional character in this “docu-comedy” (as the publicity materials classify it) is a flamboyant personal assistant named Eddie who helps around the house.

In the premiere episode of “She’s the Boss,” Nicole’s workplace (if any) is not shown. The “action,” such as it is, takes place in an around the Walters home.

As a result, what you get in this show is a family and their assistant sitting (or standing) around talking in pairs or more than pairs. The conversations are supposed to be entertaining and even funny (remember? It’s a docu-comedy), but they are neither of these things.

As with so many of these kinds of shows, the antics of some family plucked from obscurity somewhere to star in their own reality TV show are almost never interesting except, apparently, to the people in the shows, and the people at the television networks who insist on building these shows around them.

When you stop and think about it, the concept of a “docu-comedy” is doomed to fail. If the most revered comedies in the history of television taught us anything, it is that television comedies with scripts written by funny people and then performed by other funny people is the surest route to success in TV comedy.

Shows such as “She’s the Boss” represent the direct opposite of that approach -- amateurs expected to improvise (without the aid of scripts) within the parameters of their real lives in a manner that is then supposed to translate as funny to the rest of us.

It should go without saying that this is not achieved in “She’s the Boss.” Let the record show, however, that the Walterses seem like a very nice family.