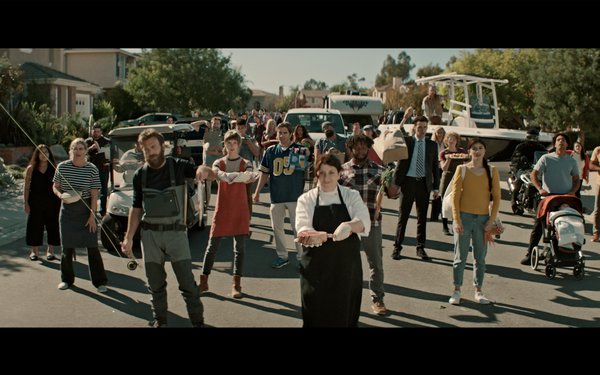 With more people cooking at home these days, thanks to the pandemic, Traeger Grills is launching the company’s largest marketing effort to date.

The “Welcome to the Traegerhood” campaign, developed with Zambezi, suggests the company's wood pallet grills bring communities together. The campaign’s centerpiece is the 60-second “Piped Piper” spot that depicts a lone Traeger Wood-Fired Grill that falls off the back of a moving trailer and rolls across the countryside as it pulls in an ever-growing crowd chasing after it. The spot is accompanied by the classic song “Pied Piper” by Crispian St. Peters.

Zambezi handled all cross-communications strategy, creative and media planning and buying efforts for the integrated campaign, and its in-house FIN Studios handled production.

A 30-second cut down first aired during the Super Bowl pre-game show on Feb. 7 and is now running online. The broader integrated campaign also includes outdoor, radio, digital, and social.

This marketing push coincides with the upcoming grilling season, as Traeger seeks to “double-down” and invest in broader awareness to introduce itself to new consumers and celebrate the grilling community that has supported it over the last several decades, explains a company spokesperson.